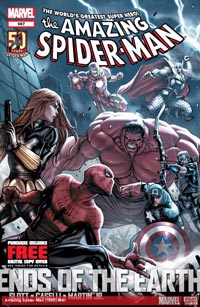 To channel Stan Lee for a second: A NEW UNIVERSE THUS IS BORN!!!

Well, there is a reason I am a media critic and Lee is the eminently more talented high priest of hyperbolic titles.

But my tagline is just as overstated as one of Lee’s. There is that.

Marvel announced last week that starting with the June 2012 issues of its top-selling comics, codes will be included in the print versions that can access digital editions of the title. The policy holds for superhero bestsellers in the $3.99 segment. Yeah, comics cost four bucks an issue now. And they wonder why the industry is struggling?

Marvel has already tried this model last year in its Ultimate comics line and now is migrating it to the high-profile superhero lines. The graphics novel Season One line also recently got codes. All of the access comes through the Marvel Comics apps on iOS and Android.

Well, kinda sorta a revolution. Comics publishers have to tread very lightly in regard to the digital shift. The infamously geeky world of comics retail shops hangs in the balance. The general line from the publishers has been that their core readers still love the feel and quality of print. But digital distribution across the DC, Marvel, Comixology, iVerse, Dark Horse and other app-ified comic newsstands has numerous advantages.

At SXSW this weekend Marvel also rolled out plans to create a new digital-only imprint with enhanced animations and effects. Also new for 2012 will be augmented reality in comics. Via an app, smartphones aimed at select issues will render enhanced and even alternative storylines in AR.

Comixology, the multi-publisher digital distributor and builder of many of these publisher-specific comics apps, recently announced that 50 million comic books and graphic novels have been downloaded via its platform to date. In December alone, 5 million comics were downloaded via apps. Comixology, citing industry Web site ICv2, claims that the 5 million digital comics downloaded to its platform (which does not contain the entire digital comics universe) in December was closing in on the number of print comics (6.4 million) sold at retail for the month. The company claims that print and digital sales are on the rise simultaneously.

While I am more of a classic comics and newspaper comics geek myself, I will say that the impact of digital comics on the app economy has been way under-reported. The top-grossing iOS apps consistently include the DC, Marvel and Comixology apps. Comics look damned good on a tablet, even a 7-incher. And these apps are at the cutting edge of in-app merchandising. By crafting sales, free previews, discounting back catalogs, bundling series, and thematizing the store around story archs, authors and recent pop culture tie-ins, the apps cross-sell and upsell extremely well.

Mobile marketers should take a look at all of these top apps to see how dynamic and evolved a digital content storefront can be.

And in these stores you don’t need to listen to a hirsute, t-shirted, former Semiotics major (“Just three more credits and I could have had my MA. No, really”) bloviate about the existential depth of mid-80s X-Men.