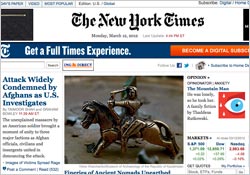 The New York Times Company could eventually see revenue from the online pay wall at NYTimes.com grow to $100 million per year, according to Barclays Capital, which cited a number of additional benefits from the pay wall -- including reduced churn in print subscriptions, as print subscribers can no longer drop their paid subs for free digital access.

According to Barclays, as the one-year anniversary of the digital pay wall approaches March 28, NYTCO has attracted about 390,000 digital subscribers to its various publications, most of them at the flagship newspaper’s Web site.

Although there are a variety of subscription plans available, at the cheapest rate -- $15 per month -- that number of digital subs would generate about $70 million per year in revenue.

Barclays warns that “the company's digital subscriber gains are difficult to sustain at the present pace and may start tapering over the course of this year,” but it also notes the high subscriber acquisition cost, given its deals with Apple and Amazon. The investment analysis firm sees the possibility for enough additional revenue to partly offset continuing declines in print advertising revenue.