2012 promises to be the most tumultuous year ever in TV media buying as digital video gives advertisers more choices and TV networks more competition. More than 40% of the total advertising expenditures in the United States are focused on traditional television. Can the TV industry delay the full impact of digital video?

It’s time for marketers to break free of the peculiar and self-defeating rules of TV advertising and make smart investments into digital video ad formats on a genre-by-genre basis.

A framework for understanding absurdity

Joseph Heller was a young writer from USC who was trained in advertising and possessed a strong grasp of the absurd, sometimes contradictory, societal rules. In many ways, his landmark novel "Catch-22" characterizes the dilemma for traditional marketing executive attempting to succeed in the modern TV industry.

"Catch-22" made popular the phrase that refers to a situation in which contradictory constraints force you to choose from no-win scenarios. The novel is about a fictional Air Force squadron fighting Mussolini off the coast of Italy in World War II. The main characters are young pilots named Yossarian and Orr who are entangled in absurd Air Force regulations as shown in this passage:

"There was only one catch and that was Catch-22, which specified that a concern for one’s safety in the face of dangers that were real and immediate was the process of a rational mind. Orr was crazy, and could be grounded. All he had to do was ask; and as soon as he did, he would no longer be crazy and would have to fly more missions… "

Yossarian eventually discerns that "Catch-22" does not actually exist, but because the military claims it does, and the world believes it does, the result is complete adherence to the rule. The absence of proof of the rule’s existence actually causes its own enforcement.

You can find the sequel to "Catch-22" in the world of modern television.

The rule of TV advertising says that you must use television to maximize reach, frequency, recall and impact. If you break this rule, you are insane. But if you are sane, you spend your advertising dollars in a way that maximizes the return on investment. Doing so would mean shifting the vast majority of your advertising dollars to measurable video display media, which means you’ve broken the rule of TV, which means you are insane.

In order to grow profits, TV executives must convince brands to pay for advertising ahead of a TV show’s actual airing, while guaranteeing stars enormous paydays ahead of ad revenue. The only way brands can justify paying ahead of time is to believe rule. As if to take their cue from"Catch-22 ," the brands obey the rule, and the absence of statistical evidence  provides for its own enforcement.

That cycle of absurdity is being broken. It only feels like TV is holding its ground against YouTube and Hulu because digital video is taking audience share away from TV gradually, one genre at a time -- instead of a sweeping change that is easier to notice. Statistics tell us digital is stealing audiences from television. I’ve ranked the principal TV genres from top to bottom, with No. 1 on the list being the most immediately affected by digital video and No. 7 the least:

Now let’s take a look at why I’ve ranked them this way.

NEWS -- The revolution will not be televised

News will be the first category to see the vast majority of its traditional advertising dollars move to digital news outlets in the short term.

Fox News Channel and CNN remain strong with Americans over 50 and the advertisers that chase them. But these older viewers will not be replaced by the generations immediately younger. Younger viewers won’t abandon the news because they never watched it in the first place. They watch clips from The Daily Show or theonion.com. Or, they simply got a constant flow of text messages or blog postings.

Take a look at the sample of average viewership during the lucrative morning show timeslots between 7 a.m. and 9 a.m. January numbers for morning news shows, a cash cow for television: 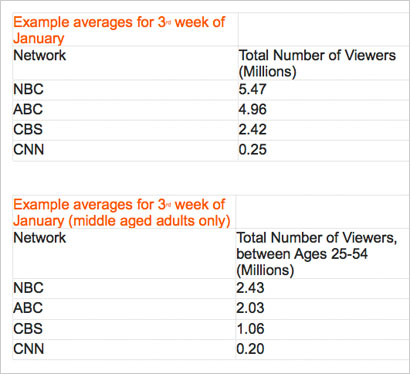 Those are tiny numbers relative to viewership on the Web. YouTube eclipses all the major networks combined during the coveted 7:00 a.m.-10:00 a.m. dayparts, and I estimate that 50 million of the 4 billion YouTube views per day (about 10%) happen in the morning slots of all times zones in the United States.

At the height of the Arab Spring, YouTube hit 135 million unique viewers per month, and at its current growth rate, YouTube may reach 500 million monthly unique viewers, or a Super Bowl audience each week, by the end of 2012.

Comedy – The really funny stuff will be online

Comedy used to be a gold mine for the networks and syndicators. Inexpensive to produce and universally appealing, comedy shows attracted droves of advertisers that paid premium prices. But then production costs got out of hand with the historic contract extension of "Friends" paying $22 million per cast member in 2002, only to be topped by Charlie Sheen’s deal for $1.2 million per episode for 24 episodes of "Two and a Half Men." All of this was ad supported with little or no ability to connect media expenditures directly to revenues.

High production costs have become disconnected from ad revenue, and that’s unsustainable. The industry has been acting on instinct, placing bets on expensive talent and selling advertisers on emotion, before it is clear a statistically measurable large audience will be watching.

Led by YouTube, digital video is going to reorder the economic model, connecting ad revenue directly to performance. Comedy shows may one day be produced one show at a time with production costs paid directly as a percentage of the media spend. Talent would no longer be guaranteed a big payday, but the overall payout could be much larger if they agreed to take a percentage of total ad buying.

With its relatively low production requirements, the comedy genre will translate easily to the Web. “Lazy Sunday,” JibJab, “Fred” and now “Annoying Orange” spawned millions of comedy producers who now deal only in digital formats. A digital version of Lorne Michaels is inevitable, and we will soon see a sustainable multi-year comedy franchise on the Web. Soon, advertising revenue for TV sitcom will be surpassed by video display advertising revenue for comedy on Hulu, YouTube, et al.

Sci-Fi/Fantasy – It takes a little imagination

With the cancellation of "V" on ABC and "The Event" on NBC, it’s increasingly clear that TV will struggle to create another "Star Trek" or "The X-Files." The sci-fi genre just feels right in the motion picture format, and advertisers might do better to buy audiences for MMOG (multiplayer online games), blogs and social hames to get their messages across to sci-fi/fantasy fans. However, syndication-heavy channels like NBC’s SyFy will do well in the short-term because serial science fiction hits make good reruns.

The legends are leaving: first, Larry King and then, Oprah. Who knows how long Ellen will stay interested, and now anyone can clearly become a very important, bold-faced name without appearing on "Charlie Rose." The genre had a good run, but the format needs updating. Still, it will take quite longer for the majority of ad dollars to shift to digital. Brands still love women in the 34-50 age range, and women still love talk TV. Advice is popular on the traditional Web, but nothing beats the guilty pleasure of talk television.

This genre will likely endure in traditional TV. The TV format really lends itself to episodic, serial storytelling. When people say “that’s really great TV,” they usually mean drama or dramedy. Talented TV creatives who usually distribute through HBO, Showtime and other pay-per-month formats will likely be the first to migrate to digital. (YouTube, are you listening? Call Bruno Heller.) Dramas with long story arcs like "Rome" and "Damages" could do well in digital video because the ad products don’t hold the content hostage.

I grew up in this genre, leading some of the first product-placement media buys in the space with "Survivor Season 1."  It will be some time before high-quality reality programming comes to the Web. Reality television is actually more sophisticated than it might appear. A lot of work goes into cast selection, plot development, and positioning with advertisers. Mark Burnett and his "Survivor" brand have appealed to advertisers because he has a rare talent: He knows how to tell a compelling story with regular people placed in irregular circumstances.

The reality genre will continue as a powerhouse in television media. Advertisers want compelling, loosely scripted real life (and outright personal tragedy like "Jon & Kate Plus 8") to keep consumers fixated.

Advertisers will continue to crave sports programming in the television media. Sports and awards shows will continue to provide advertisers with one of the few vehicles for getting get large populations to watch the same entertainment program at the same time. In a new media landscape characterized by fragmented audiences, that’s important. After all, the most Super Bowl XLVI had an audience of 112 million people.

Rights management is the other major reason why sports entertainment will be the last pillar to fall to digital media. Digital video media will take time to appreciate and learn the complexities of rights, especially in the major sports. Not only the teams and the leagues, but also governments, are major stakeholders in the status quo.

Back to "Catch-22." Advertising executives can avoid the this scenario by thinking of their video-based advertising on a genre level, as shown in the previous examples. Doing so enables them to articulate to their bosses that they are shifting money from, let’s say, CBS to CBS Digital in a structured way that anticipates audience migration and reduces wasted ad impressions.