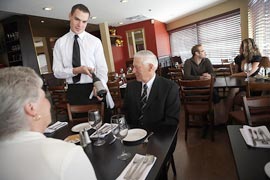 The “food services and drinking places” category recorded total sales of $43.4 billion for the month (adjusted for seasonal factors and trading days). That was up less than 1% versus January 2012, but up 8.2% versus adjusted February 2011 sales for the industry.

Furthermore, for the 12 months through January 2012, sales at full-service restaurants were 8.7% higher than in the previous 12 months –- the fastest growth pace since the late 1990s, when the economy was booming, reported The New York Times.

The sales gains at full-service restaurants -– which range from moderately priced fast-casual chains to top-end establishments -– also considerably outpaced those of limited-service restaurants or QSRs, which fared the worst of the recession far better than their sit-down counterparts, as consumers elected to trade down for their less-numerous eating-out occasions.

Moreover, over the past 20 years, stronger growth in full-service restaurant sales and slowing of growth in limited-service sales have generally coincided with growth in gross domestic product/economic improvement, Times economic writer Floyd Norris points out (although he also noted that current economic indicators indicate that the economy is growing more slowly than the full-service/limited-service restaurants trend indicator, which may in part be a factor of the different timing of reporting for these numbers.)

While Americans are coping with significantly higher gas prices (those jumped 6% in February), grocery prices were flat for the first time since July 2010, and wholesale food prices edged down 0.3% (following declines of 0.5% and 0.7% in December 2011 and January 2012).

Perhaps in part reflecting less inflationary pressure on restaurants’ costs, menu prices posted their smallest monthly gain in more than a year in February (+0.1%), down from 0.4%  in January. While restaurant operators of course seek to improve their margins by raising prices and/or check size wherever feasible, stable or moderately higher restaurant costs may also be encouraging the trend to dine out more frequently.

In January, its overall industry health index, the Restaurant Performance Index (RPI) stood at 101.3. While that was down from December’s strong level of 102.2, January marked the third consecutive month that the RPI stood above 100, which signifies expansion based on various key industry indicators.

“Restaurant operators reported positive same-store sales for the eighth consecutive month, and a majority of them expect business to continue to improve in the months ahead,” reported Hudson Riehle, SVP of the association’s Research and Knowledge Group.

In addition, Packaged Facts recently estimated that U.S. restaurant sales will grow 4.2% in 2012, on top of 6.1% growth in 2011. The research firm also estimated 8.1% growth in full-service restaurant sales last year, including a slight rebound in fine dining (although it added that the return to 2007 spending levels remains a “very steep curve.”)

“Because restaurant spending correlates to household income, the crimping of the middle class is a major hurdle for the industry, as it is of course for the national economy overall,” noted Packaged Facts’ analysts, in its “Foodservice Landscape in the U.S.” report.