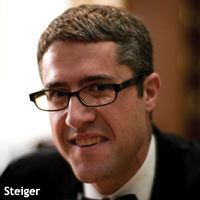 Steiger was first introduced to Method by another IPG ex-pat, former head of Initiative’s Innovation unit Jason Meil, who had joined Method as a principal in its San Francisco headquarters in 2010.

Until that point, Steiger said he had only a vague, albeit positive sense of what Method actually did, and knew it mainly as the design agency that created the Ted Talks Web site. What he learned was that Method was on the cusp of transforming into a major global experience design player. Best known for designing Web sites and other digital media platforms for especially savvy media brands such as Google, Microsoft, Samsung, Nokia, Nissan, and Time Warner Cable, the agency had just been acquired by GlobalLogic, a global, enterprise-level software and technology developer that is one of the biggest that most people on Madison Avenue have never heard of. But if Steiger is right, that will all change very soon, as Method and GlobalLogic begin stepping up their game with major consumer brands marketers in a world where design and experience seem to becoming more important than advertising and media.

To illustrate the importance of media design, Steiger leans forward and jacks up the sleeve of his shirt to reveal a sleek, black wrist watch with a digital screen brandishing the current time. He then taps it and it becomes a digital interface revealing multimedia graphics and even a music library. The watch is actually one of Apple’s iPod Nano devices cradled into an elegant wristband.

“It’s just a Nano, but when people see it on my wrist they’re kind of blown away,” Steiger, says, adding: “They’re not sure what it is.”

His point is that Apple may have originally designed the Nano to be a lightweight portable digital musical player, but when put into another design context, it becomes a state-of-the-art timekeeper that can also serve other functions.

That, he says, is the kind of logic that Method is fundamentally about, and the opportunity to help other marketers tap into it is what drove him to Method.

Steiger, who will operate out of Method’s New York City offices -- which service big media companies like Comcast, the NCAA, Turner Sports and Time Warner Cable -- says the agency has the exact right mix of ingredients for brands to compete in the next facet of the communications revolution, where interface, experience, utility and functionality become increasingly more important as the clutter of information begins to crowd out experiences that aren’t well designed.

The agency is far from a new kid on Madison Avenue’s block. It’s actually 13 years old, and has expanded worldwide, and even launched its own new product design incubator in the U.K., the Method Design Lab, which is developing products and brands that aren’t strictly digital. The agency has nothing to do with the popular household cleaning products brand of the same name, other than both utilize great design at their core.

Steiger believes design and creativity will be the key differentiators for the future of the marketing world, because he believes media -- and even underlying media technology -- are growing increasingly commoditized, and what most consumers are really seeking is experiences that add value and meaning to their lives.

“For me, a lot of this thinking came from some of the things I was looking into last year as part of the process of putting together the media lab, which was what the future looked like from the perspective of the media landscape,” he explains. “And that was the physical manifestation of a set of trends that I can distill down to these things:

“The first is that we are increasingly living in a device-agnostic world, and we are no longer building media around the living room.

“The second is that as audiences move, media moves with them. And as a corollary to that, every device is becoming trackable, and measurable.

“The third is that a brand’s ability to have a relationship over a long or short period of time with audience has to be an end-to-end experience, all the way from awareness to purchase to loyalty.”

Steiger says it was developing IPG’s lab that enabled him to focus on those trends, but that Method represents an opportunity to activate them on a scale most Madison Avenue agencies cannot do, even if they think about them.

“Ask any of the agency holding companies who their Chief Experience Officer is, and you’ll be met with blank stares,” he says.

While Method’s relationship with GlobalLogic is still relatively new (they were acquired in September 2011), they have already begun working on the kind of end-to-end solutions for brands that Steiger alluded to, with Method focusing on the front-end consumer experience, and GlobalLogic working on the back-end technology to make sure it works properly.

Steiger could not disclose some of those projects, because they’re still under wraps, but they involve designing not simply the digital media experiences of those brands, but the underlying product and services -– even the physical retail experiences that consumers go through when purchasing or otherwise interacting with their products.

To explain the logic behind experience design and branding, Steiger points to the latest in a series of “think pieces” Method has published, which explain how brands are actually a series of “patterns,” and understanding the relationships consumers have with those patterns, including their form and function, is the underlying principle behind Method’s method.