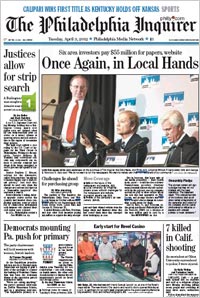 The changing fortunes of the publisher of The Philadelphia Inquirer and Philadelphia Daily News encapsulate the long-term decline in the newspaper industry.

The deal, which was agreed to this week, also provides a capital infusion of $10 million for continuing operations. Even so, the $65 million total represents an 87% decline in the value of the company since 2006.

Part of this shrinkage can be attributed to the divestment of certain assets, including its office tower, sold last year for almost $23 million. But the main factor is the steep, continuing decline in the newspaper industry, due primarily to the loss of print ad revenues.

While the company doesn’t report financial results publicly, a report in the Philadelphia Inquirer noted that a company spokesman recently justified a new round of layoffs with the admission that the “kind of revenue we have been generating has not been enough to sustain the personnel we have.”

CEO Greg Osberg will be staying with the company, but it’s not clear whether the new owners intend to carry on with some of Osberg’s innovative programs revealed last year. In June 2011, Osberg said that the company would begin marketing a relatively cheap tablet-style reader using Google's Android operating system -- the Arnova 10 G2 tablet -- bundled with digital subscriptions to its newspapers.