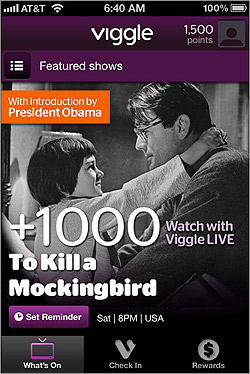 As all of us head off to Seders and Easter feasts this weekend, even the world of mobile media becomes a bit spiritual. On Saturday, April 7 at 8 Eastern Time, USA Network will celebrate the 50th anniversary of a great American film "To Kill a Mockingbird" in a special rebroadcast. This is one of that handful of movies that packs so much power and drama in every frame it is hard to click away from it no matter how many times you may have viewed it. This version will be a digital remastering of the Universal release.

This showing gets amplified by social TV provider Viggle. Users will check in to the movie via the app and get rewards points for engaging the second screen. Part of the promotion highlights USA’s charitable spin on their usual “Characters Welcome” tag line -– “Characters Unite.” This is a program that focuses on tolerance and respect. Viggle rewards points generally can be redeemed for gift cards, movie tickets and music. In this case they can help a cause. USA and Viggle will match the points that viewers accrue and turn it into a donation to the Characters Unite non-profit.

Viggle says the app second-screen experience will include annotations of key moments in the film, celebrity stories, photos and videos cued to the live broadcast.

As a movie nut myself, I am eager to see smartphone and tablet apps experiment with pushing movie extras to the device world. All of the stuff we never bothered watching on DVD/Blu-ray discs because they intruded on the film experience can be offloaded to a second screen where we might get more out of them. I expect that some day you will be able to use a third party or network’s app at any given moment in the broadcast day to get genuinely useful enhancements and information about what is on your main screen simply by activating your smartphone. Right now, frankly, many of the “social TV” apps are piping in Twitter and Facebook feeds that add little to the content beyond streams of monosyllabic gurgles and boilerplate reactions that quickly become invisible.

I would love a day when sidecar app content is de rigueur for any major film release on disc or digital download.

I look forward to what the programmers do with this great film this weekend. "To Kill a Mockingbird" was one of those instances when a film came at an important moment in American history and dramatized a crossroads in race relations. There are those rare times when popular art really matters –- when it gives us a way to envision the next steps a culture needs to take. I can’t think of a better way to spend the Passover and Easter weekend than with a movie that mattered.