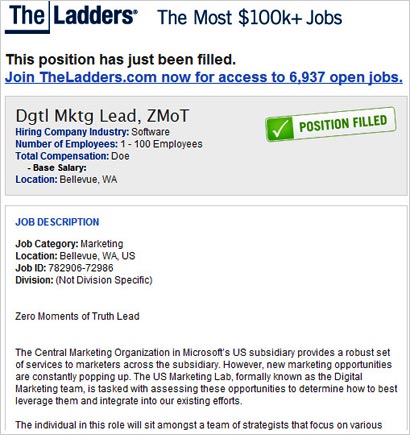 The Search Agency has begun to develop business strategies and metrics to measure the concept created by Jim Lecinski, managing director of U.S. sales at Google. That idea -- the zero moment of truth (ZMOT) -- emerged last year as an offshoot of Procter & Gamble's "the first moment of truth," which describes the initial few seconds that consumers spend in a store aisle at the shelf.

ZMOT, a philosophy in the theory of marketing, becomes the zero moment. Social or search activities on the Internet are added to the original three developed by P&G. It occurs, for example, when a consumer pulls out a mobile device, takes a photograph of the product on the store aisle shelf, and reads a rating or review before making a purchase. Companies such as General Mills and Butter Lane Cupcakes have adopted the concept.

TSA plans to reorganize services to support the model. A formula for metrics will support practical applications, explains Mike Solomon, VP of marketing strategy at The Search Agency. "ZMOT is reorganizing our thinking," he said.

Solomon has begun putting together a companion guide to measure ZMOT. The measurement system will apply to nearly all parts of a search campaign and augment traditional marketing funnel measurements. About a dozen of his clients have begun to weave this method into their business model.

Those metrics will show that other actions help to create the relationships. For instance, companies need to start paying more attention to even the smallest measure of intent, such as the action of downloading a resource product guide.

This creates a lead generation tool. Or, makes the content shareable and considers that a metric point of value.

Soloman said that not all metrics need to tie into an ROI metric -- not everything will create revenue, but rather a point of value. It helps to build a keyword list based on consideration. The challenge, however, becomes putting the theory into practice.

Plenty of companies continue to put the theory into practice to build on relationships, according to Lecinski. He said that complementary books on how to take advantage of Google ZMOT have begun to emerge, as well. He is working on updating the original version, but declined to commit to a date.

Google published Lecinski's ebook in June 2011. More than 150,000 downloads later the topic continues to spawn business strategies at search agencies, but also job openings at large corporations. Aside from automakers, Symantec now has a director of ZMOT, and Microsoft recently opened and filled a job for a ZMOT Lead, responsible for evaluating and developing strategies to take advantage of third-party information. The description reads: "By identifying and planning for ZMoT we can take advantage of these sources to surface information to communicate the value in our products that other customers and reviews have recognized."