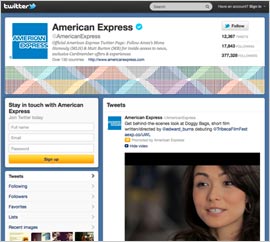 When it comes to embracing social media, the financial services industry has never been among the most aggressive in staking out its place on Facebook, Twitter or other social networking platforms. That’s partly because financial services, like the pharmaceutical industry, is more highly regulated than others.

Nevertheless, a new study suggests that financial institutions have made significant strides in the last four years. Nearly 90% of the financial firms studied now have a social media presence of some kind compared to only 20% in 2008, according to Corporate Insight, which provides research and consulting services to the financial industry.

Standing out from the pack, however, has been American Express, which launched its OPEN Forum for small business in 2007 and has continued to expand its social initiatives since then.

Corporate Insight ranked AmEx as the top financial brand in social media based on its analysis of 90 companies across four types of social properties: Facebook pages, Twitter profiles, proprietary communities, and blogs. (LinkedIn was excluded because most communications among members are private, making it difficult to gauge engagement.)

“One thing [American Express] has done is target subsets of its clients, like small business owners and individuals with specific products,” said Alan Maginn, senior analyst at Corporate Insight. “The firm also does a good job of interacting with its customers through the various social media channels rather than simply pushing out content.

AmEx also received high marks for its presence on Twitter, where its main account had 350,000 followers, up 100-fold since 2010. It averages 12 tweets per day, typically linking to articles on the AmEx official Web site or promoting deals and contests. The company also operates a dedicated customer service account (@AskAmex) and another for OPEN Forum.

Other AmEx social media programs include its much-publicized Sync partnership with Foursquare. It provides deals and discounts to cardholders who check into businesses and restaurants with the location-based service. The card giant also teamed with location-based gaming service SCVNGR to offer deals to members and extended the Sync initiative to Twitter.

The Corporate Insight report did not disclose rankings for any other financial firms studied in addition to American Express. But it did highlight social media moves by a handful of other companies. Zecco, for instance, last year introduced a stock trading service for clients on Facebook through its Wall Street application. It provides access to real-time stock quotes and charts, share investing ideas, and place trades from within the social network.

Separately, online retail brokerage firms E-Trade and optionsXpress last spring launched their own social communities where members can share portfolio information or their trade predictions. Full-service brokerages like Morgan Stanley and Smith Barney are also getting in on the act, if belatedly. The firm launched a pilot program last summer allowing 600 advisors among its 18,000-strong workforce to begin using Twitter and LinkedIn.

“We suspect this is due to the fact that firms can focus entirely on their own communications through the Twitter platform while Facebook requires the review and moderation of comments posted on the company’s page,” stated the report.

Financial institutions are increasingly using Twitter for customer service, while Facebook and Twitter have gained as recruitment vehicles. Still, only about 10% of the properties reviewed in the study provide information on career opportunities.