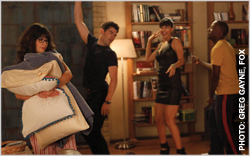 Though no humorist, Ernest Hemingway held that “a man’s got to take a lot of punishment to write a really funny book.” Almost a century later, the same seems true for TV networks, which, following a few stiff years, appear funnier than ever.

“Comedy has had its most successful season in a decade,” says Brad Adgate, senior vice president of research at Horizon Media. “The popularity of (ABC’s) Modern Family has helped a lot … similar to what The Cosby Show did in 1984 — it set the bar with programmers and viewers.”

In fact, “when you look at the resurgence of ABC, the first program discussed is Modern Family,” believes Bill Carroll, vice president and director of programming for TV station sales rep Katz Media Group.

Perhaps inspired by NBC’s critical success with The Office, Parks and Recreation and 30 Rock, the networks are definitely getting more laughs. Even Jennifer Salke, president of NBC Entertainment, would agree.

“Almost all of the big four networks are enjoying success right now with comedy,” says Salke. “There seems to be a real appetite from the audience right now for quality comedies, and I think that’s great.”

In sheer ratings terms (7.0 among adults 18-49, according to Nielsen) CBS’s 2 Broke Girls had the best debut of any show, this season — reinforcing the network’s strong block of comedies, including How I Met Your Mother and The Big Bang Theory.

“In fact, Two and a Half Men is the story of the year,” insists Wendi Trilling, executive vice president of comedy development at CBS Entertainment — at least, she says, “in terms of taking a hit show that could have been at its end with the loss of its star [Charlie Sheen] that has now come out stronger than ever with a new lead in Ashton Kutcher.”

Still riding high on its musical sensation Glee, Fox looks like it has another hit with Zooey Deschanel’s New Girl. (On the last Tuesday in January, the show’s Nielsen rating share among 18-49 viewers [3.5/9] actually rivaled that of Glee — not to mention 7.3 million viewers.)

For Fox — the home of aging animations like The Simpsons, Family Guy and American Dad! — New Girl couldn’t have come soon enough. “Until New Girl, Fox tried a whole bunch of live-action comedies and virtually all failed,” recalls David Scardino, entertainment specialist at media agency RPA. “The only thing they seemed to get right was animated comedy.”

On the cable front, even Comedy Central is outdoing itself in the laughter department. How could it top Emmy-magnet The Daily Show with Jon Stewart, The Colbert Report and South Park, among other shows? With Key & Peele — the network’s latest sketch comedy starring Keegan-Michael Key and Jordan Peele, which brought in the highest premiere ratings for a Comedy Central series since 2009, with the debut of The Jeff Dunham Show.

Heading into its third season, meanwhile, Tosh.0 continues to defy all expectations for a viral-video-dependent series. As of early February, Key & Peele and Tosh.0 were both finishing first for their timeslots across all networks.

“Given the current resurgence in comedy — particularly on the broadcast networks — clearly it stands higher than it has in a while,” Scardino says. “I would guess the success of [Fox’s] New Girl and [CBS’s] 2 Broke Girls — plus the resurrection of [CBS’s] Two and a Half Men — has probably taken the standing a bit higher.”

According to Carroll: “As was historically the case with Cosby or All in the Family and The Mary Tyler Moore Show, among genres comedy is critical to network success.”

And there’s no doubt comedy has made some kind of a comeback. “If you look at the history of the top 25 shows on broadcast, five years ago there were two sitcoms that made the list, and this year there are 11,” says Larry Jones, president of TV Land. “During the 2011-2012 season, four of the top five shows are sitcoms, and the other one is football!”

Not surprisingly, Jones is particularly proud of the Betty White vehicle Hot in Cleveland, which TV Land recently sold to CBS Television Distribution, which has plans to take the cable original out to syndication in either 2013 or 2014.

As hot as comedy seems, however, researchers are quick to put its relative success into perspective.

According to Nielsen’s recent analysis of the top 10 primetime broadcast TV shows, sitcoms have seen better days. “Once synonymous with primetime broadcasts,” read Nielsen’s report, “sitcoms disappeared from the ranking in the 2004-2005 season, only to return again briefly in the 2008-2009 season, making up just 7.4 percent of the total combined audience of the top ten programs.”

“I don’t think comedy is as important a genre as it used to be,” concedes Adgate. “The networks spend about 3 hours out of 22 hours of primetime programming a week on sitcoms.”

Still — if only in relative terms — comedies are resonating with viewers, which has led to obvious questions about what’s working and why.

“There are a lot of reasons for this comedy surge,” says Jones at TV Land. “The country has faced tough times for several years now due to war and the financial crisis, and in these types of hardships, people want to laugh.”

What’s working? Women. “A lot has been written about female-led comedies being the hot property this year, following on the success of Bridesmaids,” explains Salke at NBC Entertainment. “There’s clearly been a run on female comedies this year, with CBS’s 2 Broke Girls and Fox’s New Girl, along with our series Whitney and Are You There, Chelsea? we have some more female-centric pilots in the works right now and hope they, too, can be successful.”

Seconds Carroll: “Looking at the list of successful shows, most of which have predominantly female leads, I would expect that the direction would be to explore more female writer/producers, female comics and female leads to take advantage of the current audience taste.”

Conversely, “the other trend, perhaps a reaction to [let’s call it the Lost Lady genre], was men dealing with a less than masculine world,” notes Scardino. For some examples, look no further than ABC’s Last Man Standing, Man Up and Work It. Unfortunately, in Scardino’s humble opinion, “the results were not as good, but the shows weren’t as funny either.”

“With the recent success of multi-camera projects performed before a studio audience, some of the new offerings will likely follow that trend,” Carroll adds. “We are going to see more of a balance of the production styles among the new comedy offerings.”

Quality helps. “Better writing and better character development has helped comedies,” according to Adgate. Holding up Modern Family as the prime example, he adds: “It successfully redefines the family in a very funny and nonthreatening method.”

Of course, “Comedy has only one requirement: It has to be funny,” Scardino says. “Frankly, when I read all the bloviating about ‘single camera,’ ‘multi-camera,’ ‘culture clash,’ etc — to me it’s just ‘industry experts’ showing off with jargon.”

The next logical questions to ask are what will work — namely next season — and how comedy’s recent rise will impact the market.

Concerning the latter, Scardino says we can all expect — you guessed it — more comedies. “Interestingly, to see the current resurgence in comedy, consider that the CW is now looking at comedies this pilot season after going several seasons without any comedies.”

One such pilot, titled The Carrie Diaries, is a prequel to Candace Bushnell’s Sex and the City series, and it imagines a young Carrie Bradshaw coming of age in the 1980s.

The network has high hopes for Anger Management, a comedy pilot starring Selma Blair and Charlie Sheen. (Your loss, CBS!)

Even the Independent Film Channel has morphed into a comedy machine. Part of AMC Networks, IFC is betting big on the second season of original sketch show Portlandia — starring Fred Armisen and Carrie Brownstein — and David Cross’s The Increasingly Poor Decisions of Todd Margaret.

Aukerman is co-creator of Between Two Ferns with Zach Galifianakis. The second show, Bunk, is a game-show parody with a rotating lineup of comedians.
What else can we expect in 2012-2013?

More of the same, suggests Scardino. “TV is not an innovative medium. I don’t see anything in the pilots that have been picked up so far that’s ‘out of the box,’ and that’s not surprising … if there’s any comedy that I would expect to see imitated it’s probably New Girl, especially since I’m already seeing the lead character’s hairstyle in new commercials.”

That doesn’t mean, however, that the networks plan on mailing it in. Quite the contrary, “We are making a concerted effort to launch more comedies at NBC right now and have opened a new block on Wednesdays to complement our established Thursday night series,” says Salke. “We also have a strong comedy development slate right now, featuring some great writers and producers that we are hopeful will give us additional comedy franchises for the coming years.”

One could take that to mean that NBC isn’t entirely satisfied with Up All Night and Whitney, one of which is faring far better than the other. (Hint: It’s the one featuring Will Arnett, Christina Applegate and Maya Rudolph.)

“There is the possibility of more nights with comedy blocks,” says Carroll. “Comedies can build on an ‘ongoing’ basis a successful night for a network.”
Adds Carroll: “As the procedurals begin to fade, the cycle may return to comedy.”

Jones, for his part, doesn’t believe that the present comedy revival has hit its peak. “There is clearly a comedy surge,” he says, “so if you’re at a network that relies on comedy, you’re in a good place right now.”

“Comedy will continue to flourish in the coming television seasons,” adds Trilling at CBS Entertainment. “There is a great base of comedies on television now that can launch new programs in the seasons to come.”

“All programming genres are cyclical,” Scardino cautions. “TV comedy was pronounced dead until Cosby resurrected it, then dead again until the last season or two.”

Adds Scardino: “No doubt, [comedy] will die once more.”