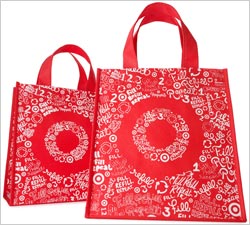 As April 22 draws closer, Target says it will celebrate America’s 42nd Earth Day by handing out 1.5 million reusable bags to customers, which swirl the words “Fill. Refill. Repeat” into its bull's-eye logo. It’s also readying an Earth Day website, which will offer consumers $50 in savings on some 40 sustainable products, through April 28.

In addition, the Minneapolis-based retailer is partnering with Recyclebank, an organization that promotes sustainable decisions by allowing individuals to earn rewards for actions like recycling and reducing water use, with two online gaming modules. And the chain continues to offer a 5-cent discount for every reusable bag shoppers use, a program launched in November 2009.

Of course, plenty of other brands are tailoring Earth Day offers, even if they are not on as grand a scale as Target. Origins, for instance, will reward anyone bringing any existing skincare product (empty or full) for one of two earth-friendly cleansers at its Macy’s counters. And Disney, which is selling organic t-shirts that kids can track right to their very roots of origin, is encouraging shoppers to trade five disposable shopping bags for a free reusable tote, as is grocery chain H-E-B. And Joann Fabric stores will hand out 50 free totes to early Earth Day shoppers.

While this year’s Earth Day on the National Mall event in Washington, D.C., will be somewhat smaller than the 40th anniversary celebration in 2010, Kathryn Stoddard, VP/ corporate development and partnerships for Earth Day Networks, tells Marketing Daily, “this will be the biggest Earth Day ever, with thousands of events around the world.”

Bridgestone and Best Western are co-presenting sponsors of Earth Day on the National Mall. In total, she says, the  Earth Day event has 27 sponsors and exhibitors this year, including nonprofits, including Calvert Investments, Whirlpool and Patagonia.