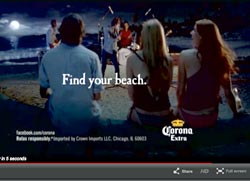 Whetting the appetites of marketers, consumers are watching more online video advertising than ever. Breaking all previous records, Americans viewed more than 8.3 billion video ads in March, according to new data from comScore.

Video ads reached 51% of the total U.S. population, an average of 53 times during the month, while Hulu delivered the highest frequency of video ads to its viewers with an average of 51, followed by ESPN, which delivered an average of 26 ads per viewer.

Google Sites, driven by YouTube.com, ranked as the top online video content property in March with 146.1 million unique viewers, followed by Yahoo Sites with 60.6 million; VEVO with 51.3 million; Facebook.com with 45.1 million; and Viacom Digital with 44.3 million.

Nearly 37 billion video views occurred during the month, with Google Sites generating the highest number at 15.7 billion, followed by Hulu with 1 billion and Yahoo Sites with 815 million.

Video ads accounted for 18.5% of all videos viewed, and 1.5% of all minutes spent viewing video online.