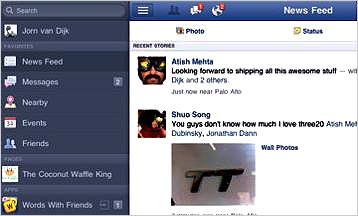 When Facebook filed for its Initial Public Offering months ago, the lack of a clear monetization strategy for the company’s massive mobile presence was a source of comment and concern. But analysts from Pivot Research Group seem confident that the social media behemoth will find a way to monetize a staggering amount of social activity -- about half of its 900 million active users.

By 2017, Pivot predicts that Facebook’s mobile ad revenues could represent 22% of the non-search mobile ad market, bringing in $490 million. While Facebook remains cagey about the formats it plans for mobile advertising, Pivot analyst Brian Wieser tells Mobile Marketing Daily that in sheer tonnage alone, the company could begin generating income. “I think they are constantly assessing their product potential internally such that I have confidence they will figure something out," Wieser says. “I think that in the worst case scenario they will run simpler text ads at some point.” He says we may see Facebook roll out some ad programs first in regional international markets like India or Japan.

While no formats and approaches have been announced, the SEC filing for Facebook’s IPO suggested that the site was considering placement of “promoted stories” into people’s feeds. But Wieser says that people are increasingly accessing their social networks on tablets. “[These] would support more conventional ad units as soon as [Facebook] wants to launch them.”

Pivot bases its projections on a presumption of market share expansion as well as extensive discussions with the marketing community. “We’re convinced about marketer conviction supporting social media in general and Facebook in particular,” the brief states.

The mobile projection is just a piece of an overall projection that Facebook overall ad revenue in 2012 will be $4.2 billion -- up 32% from 2011 -- and will reach $12.6 billion by 2017. This means that despite nearly half a billion in mobile ad revenues projected for 2017, the mobile piece still will be a fraction of Facebook’s overall ad income. Pivot also expects the online video revenue for Facebook to reach $764 million by 2017, giving the social network 17% of that market as well.

Pivot’s estimates include only display for now. A recent ebook by an anonymous “marketing insider” contends that Facebook could challenge Google’s search business by more effectively leveraging “social search” -– or using its members' likes and social graph to bring goods and services in front of them.