Walmart and Target Are Retail Rulers In Apple App Store 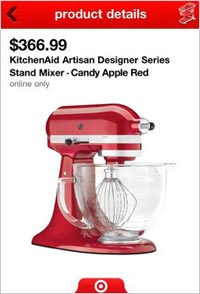 Retailers can achieve massive penetration from their branded apps, and they can come at that success from different directions. According to new research from Luth Research and Mobile+Positive, Walmart and Target have achieved dominance among general merchandise retail brands when measured by app downloads in the iOS app Store. Yet each has pursued different approaches to building audience.

Using an index of relative volume designed by Luth, Walmart gets a Luth Traffic Index of 63 compared to Target’s Index of 53. Both rivals in the general retail category are far ahead of Sears, which has an LTI of 15. Newcomer to the app marketplace Kohl's anchors the index with an LTI of 1.

But Walmart’s numeric lead in downloads is accomplished by proliferating its brand across its many Walmart Sound check apps that feature individual artists. Each of these apps features performances and recording stars like Lady Gaga, Justin Bieber and Katy Perry. Walmart is tapping into a wide range of audience bases and tastes with these apps -- more than thirty in the app store.

But Target’s strategy is focused on driving people to its single app. Their branded retail app receives more downloads than Walmart’s core retail app, although Walmart gets a greater brand reach overall. Target has refreshed its app rigorously and is on version 5.3.

The Luth traffic Index estimates the total downloads an app has achieved over its lifetime by making a calculation off of user comments and ratings, price, category and release dates.

The Sears family of apps for Sears, kmart, Shop Your Way and others are more fragmented than Target’s, but less than Walmart’s. these apps are more focused on m-commerce and tend to receive more updates, which can help keep an app top of mind for users.

Luth and Mobile+Positive have posted a full infographic from the research.

apps, mobile, retail
1 comment about "Walmart and Target Are Retail Rulers In Apple App Store ".
Check to receive email when comments are posted.
Next story loading