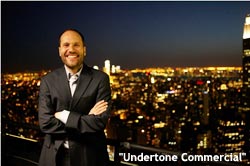 Last year, more than 4.8 trillion display ads were served online, according to a new ad campaign breaking today by online ad network operator Undertone, adding: “How many do you remember?” To make sure you remember it, Undertone isn’t using the medium it pitches to advertisers and agencies -- it’s utilizing television. In an unusual media buy for a B-to-B marketer aimed at a relatively small industrial audience, Undertone has purchased two 30-second spots in tonight’s season premiere episode of AMC’s “The Pitch,” a new reality series about agencies competing for an account pitch.

Granted that a higher-than-normal share of ad industry executives are likely to be tuning in to the AMC series, but Undertone is likely to generate some buzz simply from the fact that it is utilizing TV to pitch an online ad platform aimed at a relatively small audience of media buyers.

The exact CPM of the buy may not be calculable, as Nielsen data doesn’t break out viewers in terms of the industries they are employed in, but it is likely to be pretty pricey in terms of relative reach. Undertone did not disclose what it was paying for the two 30-second TV spots, but AMC generally sells “The Pitch” in packages based on three airings -- the original, plus two repeats -- for about $56,000. Assuming Undertone paid those rates, the TV campaign will cost the online ad purveyor more than $100,000.

If it is successful, it will live up to its branding promise -- “Standout and be remembered” -- but it will have done it by using television, not the online media it pitches advertisers to use. In fact, the TV commercials go out of their way to point out how forgettable online ads actually are.