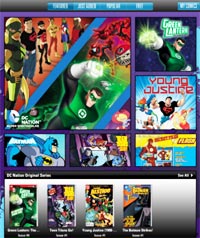 How weird is it that one of the largest publishers of comics needs to carve out a specific space just for kids comics? Wasn’t there a time when comics and kids were synonymous? Not lately. Much of the comics material we now identify with fan boys and hirsute comics shop owners are a far cry from the antiseptic and bland superheroes of our youth (well, my youth).  And so DC Entertainment this week released a special app focused specifically on “family-friendly” and kid-safe content.

The DC Nation app is leveraging the brand and franchise that now appears on Cartoon Network. These are characters and shows that are designed as kid-safe versions of familiar heroes like Superman and Green Lantern. This app will cross-promote the Cartoon Network block of DC Nation programming in a number of ways, including a mini-mag that will include highlights of the on-air shows.

A DC Nation print magazine will appear on newsstands in coming months as well.

Expect to see more stories this year about the struggles of the comic book industry. As the Marvel franchise the Avengers hits theaters in coming weeks, it is an example of an industry that appears to have more power in its franchises than in the source material for these characters and worlds. Comic sales overall have been on a declining path for years, with many talking about the possible demise of the industry. Ironic that the surge in superhero film licenses coincided with a loss of interest in the source. Digital media is one way that publishers are hoping to stem the flow.

The manufacturers are playing with a number of digital strategies. There are the AR-enhanced comics that Marvel just issued. Then we have digital-only comics that can use narration and animation effects.

One way that digital distribution might help the industry is the way that apps open up the back catalog. In the comics industry it is understood that newcomers find it hard to get into the complex storylines and universes that years of publishing have piled onto these characters. That is one reason that DC reset 52 of their superhero series back to issue #1 in recent months. In this app aimed at kids, the first issues of some of the popular series are made available for free.

Digital content merchandising is one of the more interesting aspects of these mobile and tablet comics apps. Based on an engine from Comixology, the DC Nation app (along with Marvel and the standard DC app) craft a storefront for content that is more compelling than much of what Apple does in its app store. It presents the content in an attractive way, creates time-sensitive daily deals and specials, and even features sections designed just for newbies.

When Apple finally launched its Newsstand for paid periodicals in the app Store last year, you would think that people never saw content merchandising before. In fact, smarter and more advanced ways of creating digital storefronts for content were already being assembled in these comics apps.