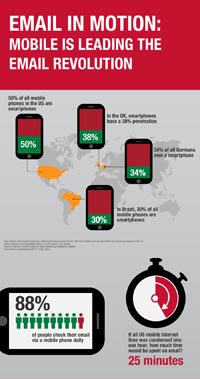 Return Path projects that mobile will overtake Webmail and the desktop PC to become the leading platform for e-mail by year’s end. Email readership on mobile devices accounts for 30% of all opens, up from 10% a few years ago, according to a new study by the email certification and reputation monitoring company,

Return Path estimates that proportion will reach about 35% by June, eclipsing Webmail services like Yahoo Mail, Hotmail and Gmail, and roughly equaling email opens on desktop clients like Outlook by mid-year. “What we’ve seen over the past year and a half is that mobile is really eating away at the share of Webmail views,” said Tom Sather, senior director of email research at Return Path. (A Webmail service accessed within a phone’s native email program would be counted as a mobile view in the study.)

That’s not welcome news for the Webmail providers. Email ads that might appear in a traditional Web browser will not show up in a native mobile email reader. "For Gmail, Yahoo and Hotmail, if their readers are moving away from a Webmail view, where they can monetize it, they’re losing out, too,” said Sather.

The share of desktop email clients led by Outlook, by contrast, have held relatively steady because people continue to use them mainly at work on the PC. Mobile email opens overall jumped 82.4% in just the last year, as of March. Driving that trend is the proliferation of iPhones and iPads, with Apple devices accounting for 85% of all mobile email opens, according to the data collected from 500 clients using Return Path’s analytics tools.

Sather said email opens are probably split about evenly between Google’s Android and Apple’s iOS -- the two dominant smartphone platforms -- when allowing for technical differences in tracking that led to an overrepresentation of the Apple operating system. New data from comScore on Tuesday showed that Android was running on 51% of smartphones in the U.S., compared to about 30% for iOS.

More broadly, smartphone penetration has reached about 50% in the U.S., while 15% to 20% of mobile users now have tablets. The Return Path study showed that email readership on the iPad, in particular, had grown quickly -- up 53% from a year ago.

Despite the sharp rise in mobile email use, the company found that nearly half (48%) of marketers don’t know how many mobile subscribers they have. That can be a problem if people are getting email messages that haven’t been optimized for the mobile screen.

“If you have a poorly crafted email experience for mobile, people can just get frustrated and delete it,” said Sather.

In practice, that means email messages aimed at mobile users should be formatted so they render properly, at least on iOS and Android devices. Sather said new technologies are emerging that allow email marketers to see how their desktop or Webmail messages render on different mobile platforms to help avoid problems when launching campaigns.