Episode 507: Oh Dad, Poor Dad, Both Stepgrandmamas Are Down For The Count And I'm Feeling So Sad! 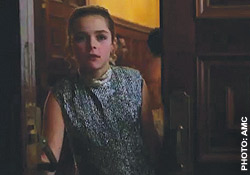 Like the Heinz pitch that saved the day (“Some things never change,”), this episode was all about mothers and children, having multiple dinners, second childhoods, and dreams for the future. Unlike the sentimental beans campaign, however, which reenacts the same scene while tracing humanity in its march from brown goo to the moon, this particular dinner story results in disappointment, disillusionment, and the fury and sadness of being lied to -- all very adult themes.

“Sooner or later, Don, your little girl will spread her legs and fly away,” Professor Calvet malaprops. It’s a genius verbal mix-up, meant to convey his own discomfort with his daughter’s adult life. “Wings, Daddy,” she corrects him.

There were so many links and parallel references in this dense episode that it’s hard to know where to start.  Go fish, anyone? For starters, it easily mixes references to Karl Marx and Shirley Temple, with some Edward Albee thrown in.  Here’s a thumbnail description of “Who’s Afraid of Virginia Woolf,” the Edward Albee play that debuted in movie form in 1966: “Bitter, aging couple, with the help of alcohol, use a young couple to fuel emotional pain towards each other.” George, (played by Richard Burton) was a failed academic, dontcha know, and his viperfish wife was his real-life better half, none other than Liz Taylor. 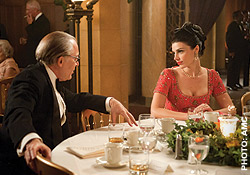 But mostly, it was (finally!) father-daughter day at Mad Men Central.  And after all the focus on the angry and Oedipal, it was a relief  (sort of) to view so many personal, professional, and parental relationships through a female lens, for a change.

Right off the bat, I was thrilled to see Joan, Peggy, and Megan supporting each other at the office. There were a lot of “good for you(s)!” exchanged. (I guess those three words were the pre-Oprah equivalent of  “You go, girl.”) And earlier, Mrs. Heinz client had told Megan privately (and rather uncharacteristically) “You’re so good for that man!” Her act of “sisterhood” in the ladies' room was what allowed Megan to save the account with Don.

In Peggy’s case, she's had to fight so hard for her job that I feared that as a boss, she’d begin to see other women as threats and guard her position zealously. And certainly, Peggy has reason to be jealous of Megan -- who, as her father said, got to skip the whole hard work part. But unlike Stan and Ginsberg, Peggy couldn’t have been kinder or more generous about Megan’s Heinz triumph, and told her to savor it. And by the same token, while Peggy and Joan once had a falling out, and an uneasy détente, Joan was helpful to Peggy in switching schedules and giving her advice about her dinner with Abe. (The love mentoring session included one of her best lines ever: "Men don't take the time to end things. They ignore you, until you insist on a declaration of hate.”) 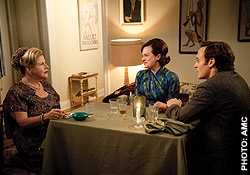 When Peggy came back to Joan to recount the somewhat disappointing proposal from Abe -- that they “shack up” -- Joan in turn was encouraging and generous about how modern it was.

The reality, however, is that Megan couldn’t seem to enjoy her own sudden success, and Peggy is as clueless as ever about men and the home front.

Meanwhile, Mom and Pop Calvet’s visit offers a fascinating window into Megan’s character. No wonder she got involved with Don and married him so quickly; in many ways, she is reliving the dysfunction of her parents’ junction. Her gorgeous mother (played by Julia Ormond -- how exciting is that?) appears to have married an unhappy older man who cheats on her, and they regularly indulge in violent blowout fights. (Emile yells at Marie, “You’re just like your mother!” If you recall last week’s horrible fight between Don and Megan, he called her out for talking to her mother too much in French.)

I loved the focus on Sally. Kiernan Shipka is a fantastic actress who just keeps getting better; her story sets the stage for the coming-of-age saga that, as Britney Spears so inimitably put it in song,  means Sally is an in-betweener, “Not a Girl, Not Yet a Woman.” 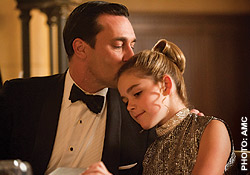 Despite her young age, Sally showed tremendous equanimity in the face of the Grandma Pauline disaster. She called the police, and elevated Bluto’s giant foot, treating her like some latter-day Cinderella, (and had enough later-life Draper in her to lie about the cause of the tripping, as well.)

The real sadness is that Sally’s seen a lot of grown-up ugliness in her tender years. She could understandably develop Post-Gala Awards Dinner Traumatic Stress Syndrome.  (By the way, Sally walking in on post-tripping Roger and Stepgrandma mirrored the scene that Megan had previously mentioned: “My mother walked in and [my father] was on the phone, crying to his latest grad student.” It also reminded me of the time that Betty wandered away from a party with Don and ended up being belly-groped by Henry, although that act was PG 13 compared with the on-your-knees servicing that Roger got.

So Madame Marie is no Madame Curie, that’s for sure.  Previously, there was no glimmer of a suggestion that Megan’s mother is an alcoholic who acts out sexually because she’s mad at her husband and is jealous of her daughter. 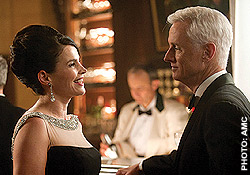 Roger is phenomenal lately, acting out his second childhood, or something. The scenes where he got Sally her Shirley Temples, while she still had her innocence, were electric.

Maybe Sally will put her Boots Made for Walkin’ back on when she gets home, and be okay. Indeed, her white patent go-go boots were spectacular, as was her futuristic silver lame mini dress. (And Nancy Sinatra’s “These Boots Were Made For Walking,” was released, yes, in February of 1966.) And the episode also perhaps referenced “The Discreet Charm of the Bourgeoisie,” the Luis Bunuel movie that showed a group of Frenchies and their thwarted attempts to have a dinner party.

But before the Draper group could attend its fancy dinner soiree, Megan, her mother, and Sally went shopping. So that explains the fabulous frocks and hair and makeup all around. But how to explain her cheatin’ daddy’s tuxedo? Wouldn’t any self-respecting Marxist call it a “monkey suit,” and refuse to wear it? And I might be coming from a perspective that’s less Karl and more Groucho Marx here, but I see a Maoist or heavy socialist, anti-capitalist-type in a beret, a turtleneck, (or fraying shirt with stained tie) beat-up sports coat, and old corduroys, even at a black-tie dinner. (Come to think of it, like Ginsberg. He dresses like a Communist!) Perhaps the explanation for his dapperness is the same as Don’s allowance for his mother-in-law touching him? “He’s French”?

The pere Calvet  also rolls with some eminent eyewear; in those glasses he’s a dead ringer for the younger Jean Paul Sartre.  (Sartre wrote the play “Dirty Hands,” and Sally said the city was “dirty.”) The play is about a young Communist. (Insert “Twilight Zone” music here! And come to mention it, will Ken be the next Rod Serling?) 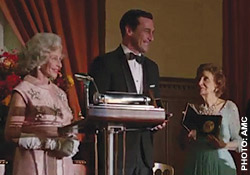 But back to the many dinners.

At the dinner with the dead-fish Heinz client, the old Don Draper magic appears at dessert. No such luck for Peggy, whose disapproving mother, by taking back her cake, can’t let her daughter have her cake and eat it, too! Her advice wasn’t all bad, but the way it was delivered was so vicious. She cruelly spat out that Abe will use her and leave her, and that Peggy should instead get a cat, or a series of them, until she dies.

Actually, dying was mentioned a lot. The professor screamed at his wife, “You won’t be happy until you see me dead! And Don was told  “They’ll bury your desk in awards but never work with you.”

It’ll be interesting to see how Peggy and Abe living together will play out. It seems like she really did want to marry him. And the way she looked so pink and dewy and responded with “I do!” after Abe asked her if she still wanted to eat was so sad. Despite what Joan thought, his proposition -- about waking up in the same place, and doing grocery shopping -- was not exactly romantic. (He’s the Communist, not Megan’s dad!) 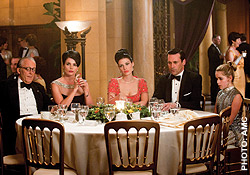 Then there’s Glen. He looks like a giant, on the hallway phone from prep school! I’m glad Sally has such an easy rapport with him, and can discuss “Bluto.” (I know that she makes for a great story line, but really, wouldn’t Betty have a housekeeper to watch the kids?)

The shot at the end -- with all the devastated attendees at the table -- was brilliant, and could have been the episode capper. But Sally had the final words:“It’s dirty.” That goes for everything in the episode from Bobby’s staining the white carpet with ink, to the hypocrisy of award shows, to the dirty business of advertising and adult affairs.

“It’s the future. It’s all I ever wanted,” the Heinz client says of his new campaign. Yes, and what happens when you get that?

mad men, television, tv
14 comments about "Episode 507: Oh Dad, Poor Dad, Both Stepgrandmamas Are Down For The Count And I'm Feeling So Sad!".
Check to receive email when comments are posted.
Read more comments >
Next story loading