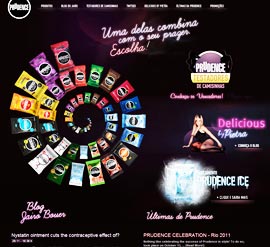 Where's the last place you had sex? That's one question in a list that DKT International, a nonprofit organization promoting family planning and HIV/AIDS prevention, asked in an online campaign running in Brazil. Google AdWords and Facebook Ads drove traffic to a dedicated Web site where consumers were asked numerous questions related to their sexual experience.

The online campaign ran for 45 days, ending April 15. It asked consumers to post a description of their last sexual experience, location, partner gender, and position. It also asked participants to reveal their favorite type of condom. The DKT Condom Tester Program in Brazil that ran last year resulted in the prevention of nearly 10 million infant deaths and about 250,000 unwanted pregnancies in 2011.

The promotion that asked consumers to share their experience came from a Planned Parenthood campaign where 55,000 condoms with QR codes were distributed in the United States. The codes encouraged college students to anonymously "check in" and boast about the great safe sex they had.

DKT's contest sparked more than 100,000 Web site visits, 10,000 registered participants and 3,000 submitted stories from consumers in Brazil. It also pulled in stores from consumers in Europe, as well as the United States, Canada, Mexico, Uruguay, Argentina, South Africa, and Japan.

While Google AdWords proves successful for targeting consumers in Istanbul, Turkey, where about 10% of sales come from online, Facebook drives more traffic and sales in Brazil. Targeting ads to specific audiences prompted Fans to Like the Facebook page or sent them to the Web site where visitors could sign up for the newsletter, participate in the promotion, and eventually make a purchase.

Facebook provided the best targeted approach for the promotion. This year's drew in 78% men and the remainder were women. It allowed DKT to serve ads to specific groups, such as married men looking for relationships with men.

DKT also ran banner ads and advertisements in men’s magazines, but Daniel Marum, DKT's country director in Brazil, said the Facebook portion of the campaign, targeting members ages 18 to 25, worked so well that he moved part of the budget allocated for portal banners to Facebook Ads. The shift occurred about three weeks into the campaign. "The campaign created nearly 30,000 Facebook Likes in about 45 days," he said.

Christopher Purdy, executive VP at DKT, said reaching consumers in countries outside the United States and Europe, and asking them to purchase goods online isn't always easy. For example, Africa and some Asian countries don't have strong postal delivery services and ecommerce systems for consumers to buy online.

Turkey and Brazil are two countries working out the kinks in ecommerce and postal delivery services, allowing DKT to drive traffic and sales through online campaigns, Purdy said.

This campaign didn't have a mobile component, but Marun said DKT has done some integration with Foursquare.