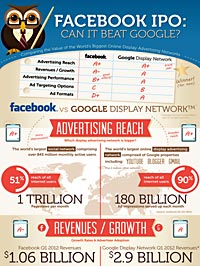 Facebook fails as an ad company, although it generates the majority of revenue from advertising. The technology has not kept pace with explosive user growth, falling short in ad-targeting options and formats, according to analyses released Tuesday.

WordStream compared the format and ad performance of ads running on Facebook and Google Display Network. In a report card, Facebook receives the highest marks from advertising reach and revenue growth -- A+ and A-, respectively -- but only a B+ for advertising performance for "good effort," C grade for ad-targeting options, and D+ for ad formats. Google receives A+, A, A, B, and A, respectively.

It cost Facebook more than $1 billion last year to deliver ads, when factoring in engineers, technology and more, according to a Facebook video.

More than half of Facebook users -- 901 million monthly as of March 31 -- access the social site through a mobile device. The social site estimates more than 500 million mobile monthly active users as of April 20 -- yet no mobile ad-targeting options exist, according to Larry Kim, founder of WordStream, a search engine marketing firm. "The site also lacks engaging ad formats critical to driving relevance, experience and click-through rates, such as animation or video ads," he said.

The industry average for click-through rates on banner ads stands at one-tenth of a percent. On Facebook, that average stands at half of the industry average, while the Google Display Network generates four times the amount. "CTRs measure relevancy, so if you have good targeting options and engaging ad formats, you would expect more people to click on ads," said Larry Kim, founder of WordsStream.

The average Facebook user spends 20 minutes per day on the site, but for the company to flourish as an ad platform to generate revenue it must keep better pace with the growth of technology. Forrester Research analyst Nate Elliott believes "Facebook needs to take marketing seriously."

Worldwide advertising revenue at Facebook should reach $5.06 billion this year -- up from $3.15 billion, according to eMarketer. The research firm said Facebook's share of overall U.S. display ad market revenue grew to 14% in 2011, up from 11.5% in 2010.

While Facebook generates the majority of its revenue from ads, it lacks the ability to retarget ads on desktops and mobile devices, which would improve return on investments for brands. The open social network also does not provide integration to target ads across the Internet.

Kim believes Facebook has a lot of work to do before it can sustain revenue growth from online advertising. He highlights that work in an infographic. It remains to be seen, based on Zuckerberg's comments to shareholders about not initially designing the social network as a company, if they even want to become an advertising company at all, he said.