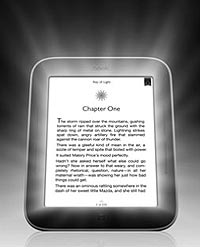 Google searches for "tech gifts for mom" rose 25% from 2010 to 2011. Searches in the 30 days prior rose 20% for "ereader" and "best ereader." Some of those searches found their way to Barnes & Noble to check out the GlowLight Nook.

Today, searching for "nook" on google.com returns an elaborate paid-search ad, complete with six site links and three connected image ads for Barnes & Noble, OfficeMax, and Wireless Emporium. In fact, the first half of the search page is filled with Barnes & Noble-related ads. Those who mouse over the images in the ads will find additional information, such as free shipping, and percent back in rewards.

Research released Tuesday from Compete, a Kantar Media company, highlights the importance of creating relevant content. "Each search engine has its own unique, loyal users and ads should be created specifically for each one rather than reused across all your search campaigns," according to the white paper.

Nearly 95% of the United States Internet Browsing Population (IBP) accessed a search engine in January 2012, averaging 37 search engine visits per person and spending a total of 64,893,262,023 minutes searching online. The data is based on Compete's General Portals and Search category. An increase in searches should also mean a rise in marketing -- not only on engines, but portals too.

Portals or destination sites like YouTube continue to attract more visitors. The interactive ad running on YouTube for the Barnes & Noble GlowLight Nook ran the week prior to Mother's Day. It allowed site visitors to play with the Nook's dimmer in the advertisement.

Sasha Norkin, VP of Nook marketing at Barnes & Noble, said the ad created a 9% interaction rate, and served up about 55 million impressions. The ad ran for 24 hours the week of May 6 to highlight the front-lit feature.

Norkin declined to describe any plans for Father's Day ads, but said advertising plans are in the works. "We're looking at lots of options for Father's Day, but have not locked in our total plan yet," she said.