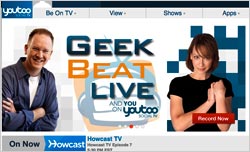 Blurring the lines between old and new media, Youtoo just debuted a Facebook app that encourages users to upload videos for TV consumption. The move is plainly a bid by Youtoo to expand its reach. “For the first time, Youtoo technology is instantly available to the 800 million Facebook users,” said CEO Chris Wyatt.

Formerly AmericanLife TV Network, Youtoo TV -- which can now be seen in 177 domestic cable markets -- and social-media platform Youtoo.com have been around since late 2011.

Youtoo TV is available in more than 15 million cable households, but Wyatt sees the network and the Web site as a way to test new products and technologies.

The idea is to then work with TV producers and networks to integrate those technologies into the shows.

Users of the new app can record and upload videos based on certain questions. Once videos are recorded, they will automatically post to users’ Facebook timelines or walls. They can then be shared among “friends.”

When a Facebook user’s video is approved and scheduled for air, they will receive a notification on Facebook of the time and date they will be on Youtoo TV. To date, YouToo claims to have nationally televised over 90,000 videos submissions from users who have uploaded their videos via Youtoo.com.

For Facebook users who don't want to be on TV, the "Be on TV" app allows them to send personalized messages, including birthday greetings and congratulations to family and friends

Mark Burnett -- who has overseen a string of reality hits, including “Survivor” -- recently took an ownership stake in Youtoo. The investment, which was not disclosed, came from Burnett’s company One Three Television.

To date, Youtoo has attracted big cable networks, including Comcast, as well as content creators, directors and producers such as Christopher Coppola.