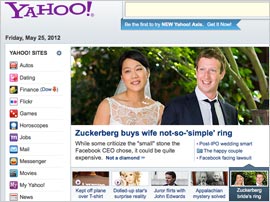 In some much-needed good news, display ads on Yahoo’s home page appeared strong through the first half of the year.

According to new data from Macquarie Securities, sales of oversized and custom ad units on Yahoo’s main page rose slightly on a sequential basis, but were up substantially year-over-year.

After rising for several quarters, Macquarie saw a slight dropoff in sell-through of its login page from the first half of the first quarter of the year, but this was still up substantially year-over-year.

“This increased sell-through is a positive, although we do caution that it remains difficult to determine the extent to which it’s being driven by discounting,” according to Ben Schachter, Macquarie analyst and the report’s lead author.

AOL’s home page display trends appeared largely stable during the first half of the second quarter of the year, with sales of oversized and custom ad units flat from the prior year.

However, AOL also featured fewer purely brand-focused ads, and an increase in direct response-focused advertising on a year-over-year basis.

YouTube has also remained stable over recent quarters, with a concentration of media advertisers on the site up on a year-over-year basis.

“We’d prefer to see more diversification of the advertising base, but it’s difficult to argue with YouTube’s ad quality,” Schachter said. “Its highly engaging oversized masthead ad unit sold 82% of the days in [the first half of the second quarter of the year].”

Plus, auto advertisers remained highly visible in the period, accounting for 21% of total ads -- versus 26% in the first half of the first quarter.

Having only tracked Amazon since the fourth quarter of last year, Macquarie believes that the ecommerce giant has meaningful plans to ramp up its display ad business -- not only on its own sites, but on third-party properties as well.

Overall, Macquarie noted a trend toward higher-quality advertising through the first half of the second quarter, with a much larger share of brand-focused and fewer direct response-oriented ad units.