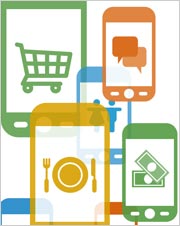 Despite rumors to the contrary, display advertising is not dead, according to an upbeat report on the formats from Google-Owned DoubleClick. But among the key growth areas, mobile clearly stands out.

The explosive use of the mobile Web has led to growth of more than 250% in impressions across the Ad Exchange and AdSense platforms from the company between Q3 and Q4 2011. Mobile is growing at a faster rate than desktop in part from the rise of mobile-only populations globally. But among those segments trying to fill all of that inventory tsunami, shopping-related publishers are leading the way with 69% growth in mobile Web impressions, followed by Food and Drink (61%), People & Society (47%), Reference (45%), Books and Literature (45%), Online Communities (43%) and Law and Government (41%).