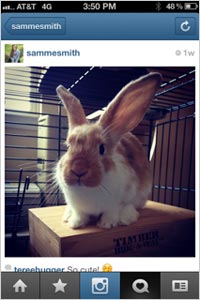 My favorite focus group on all matters digital is my 20-year-old daughter. For those of you who have followed her and my exploits over the years in my Mobile Insider columns, you already know that she has been both my muse and my loyal antagonist as both our generations come at the mobile revolution quite differently. For her -- and I believe many of her peers -- mobility has always been most about person-to-person and group communication, while for me it has been mostly about mobile’s role as a media platform. In fact, even after three years of campaigning when she finally got her hands on the iPhone, her use of apps was small and narrow.

But she has glommed onto the media-discovery and creation apps, especially StumbleUpon and Instagram as well as Pinterest. I was inquiring about her use of the apps the other day.

“You don’t ‘inquire’ -- you grill me, Dad,” she usually reminds me. Okay, it can’t be easy being the daughter of a digital media critic who regularly pesters his kid about her media habits in cool professorial ways.

“Really, Dad, lighten up. You sound like a Census taker sometimes.”

Point taken. In fact, some of her best insights about digital media really come spontaneously. Last night she volunteered that she has embraced Pinterest and Instagram because they are less stressful breaks from the rough and tumble of Facebook.

“Facebook brings out the worst in people,” she says. This was interesting coming from a girl who in recent years appears to live on Zuckerberg’s social network and sometimes uses it in place of email SMS and most other forms of peer-to-peer communication.

“People seem to look for drama and conflict,” she now says, safely two years out of high school. Her thesis, clarified by the visual nature of these other social apps, is that Facebook’s reliance on text and language without spoken nuance leads to more misunderstandings and hurt feelings than friendships. “I have seen more feuds and breakups happen among the people I know here than happen in face-to-face meetings,” she tells me. The broadcast nature of it all -- the ways in which people in different circles of acquaintance are listening in, misinterpreting, sharing, making trouble -- gets tiresome. “I don’t post anything personal or meaningful anymore,” she says. It just asks for trouble. “I only post about my animals and work.” Her posts are fewer, and the emotional investment behind them weaker.

For her, Pinterest and Instagram are welcome respites from social networking as faux friendship. It makes sense. These social networks are not only visual, but they play off of different impulses. I imagine it is possible to make a snarky Instagram picture and caption, but it doesn’t seem to me the natural path for most. It is an app that -- like Pinterest -- expresses through creation, inspiration, sharing positive moments. Obviously Facebook allows multimedia posts too, but its roots as an always-on, text-heavy, desktop console for constant communication is different from a mobile-centric platofrm that is opportunistic, of the moment, and intrinsically visual.

Now I have to say that among my age group, in my newsfeed, Facebook is more a platform for sharing positive moments. For my daughter’s age group, I can imagine how things would be different. They use Facebook as an extension of their relationships in a deeper way than many of us who are older. In my Facebook circle the people are physically more distant from one another and are posting in order to keep in touch and share separate experiences. For her, most of her Facebook circle are real-world friends nearby for whom Facebook is just another venue for an ongoing and very personal conversation.

But I am more interested in the implications of her insight for Instagram, Pinterest and other media-sharing apps that leverage not only visual communication, but mobility and life moments. I wonder if social networks, especially as they mobilize, start to have different characters and tones. Yes -- Instagram is a simple idea of photo sharing mobilized. But it is also inspiration-sharing, beauty sharing, sentiment sharing. Instagram and Pinterest apps are much more likely to make me smile. I often open Facebook with a mild sense of dread. Now what? I sometimes think.

Which is another way to say that mobility may do to social networking what it has begun to do to other media –- change it in kind, not just in shape and size.  We have the opportunity to reimagine what we want our social communications to be and even to create new spaces with a variety of moods, modes and tones.