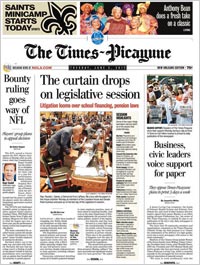 The New Orleans Times-Picayune has gone from reporting the news to being the news, following Advance Publications’ announcement that it will cut the beleaguered newspaper’s publication schedule from seven to just three days a week.

The news has stirred opposition from the city’s civic leaders and businesspeople, according to the newspaper, which reported the formation of the “Times-Picayune Citizens’ Group." Its mission is to “ensure the continuation of the delivery of a high quality, seven-day-a-week newspaper, with access to the entire community.”

“The group will open discussions with the current owners, as well as other interested parties to achieve its purpose,” according to an official statement from the group, whose membership includes Scott Cowen, president of Tulane University; Gregory M. Aymond, Archbishop of New Orleans; political power couple James Carville and Mary Matalin; and writer Walter Isaacson.

While the group provided no details about its plans, the reference to “other interested parties” could hint at a potential bid for the newspaper by local businessmen. The last few years have seen similar deals giving local investors control of newspapers, including the Philadelphia Inquirer, San Diego Union-Tribune and Omaha World-Herald.

According to the Times-Picayune, a community rally in support of the newspaper is scheduled for this afternoon, with the goal of convincing the owners to continue publishing seven days a week or sell the newspaper to someone who will.

Like other newspapers in the area, the Times-Picayune has suffered from the combined effects of the secular downturn in the newspaper business, due to the migration of readers to the Web and collapsing demand for print advertising, as well as the loss of population resulting from Hurricane Katrina in August 2005.

Advance Publications also said it is slashing the publication schedule for three Alabama newspapers: The Birmingham News, The Huntsville Times and The Mobile Press-Register.