At Least Mitt Romney is Buying Into the iAd 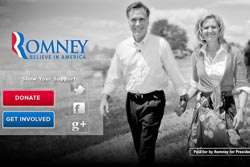 A new campaign may be showing up in that Apple iAd gallery of creative executions the company is so fond of showing off. A rich media campaign from the Mitt Romney Presidential campaign is slated to launch this week across iPhone and iPad, according to a report in The Wall Street Journal.

The campaign has already noted that a substantial share of traffic to the Romney campaign Web site comes from mobile devices. Most of those mobile users were coming from iOS devices.

The creative in the campaign will invite users to watch TV spots featuring the candidate or donate. But it will also allow the user to go deeper and download the “With Mitt” iOS app. The photo-sharing app, which launched in late May, superimposes a talk bubble with various booster quotes (“I’m With Mitt” etc.) on a user's photo. The image then can be shared across the social networks. The “With Mitt” app is where the Romney campaign issued a now-infamous misspelling of “America” -- much to the enjoyment of bloggers and niche cable news channels.

The iAd campaign is targeting states where Romney TV ads are in tight rotation. According to Romney’s digital media director Zac Moffatt, quoted in the WSJ piece, “we’re not looking to replace TV, but to augment and amplify.”

While both the Romney and Obama campaigns have been leveraging mobile media on a number of different levels -- including banner ads across networks -- this is the first instance of a national politician using Apple’s much-hyped iAds service. Once touted by Apple as another of its “revolutions,” this time for mobile advertising, iAds were seen by many agencies as overpriced and over-hyped. Apple’s notorious control over the creative process and pricing aimed to enhance the prestige of the product both undermined confidence in the platform.

I confess to still being mystified by the entire iAd model. Admittedly, some of the executions of the ad-as-app format have been genuinely entertaining. I gushed myself last year over a Nespresso iAd experience that was just a blast. But I never got why a deep and rich experience like this was all anchored in, and reliant on, the most unengaging ad unit imaginable -- the mobile banner. Worse, Apple muddied its own waters by letting developers use the iAd platform landing to push people to app download pages. As a result, the user never knew what the “iAd” tag on an ad really meant –- a click-through to a fun in-app environment or just a download page.

Apple seemed to be pitching this to small developers as a monetization opportunity rather than partnering with major media to secure premium contexts. All of this creativity and money aimed at what was essentially a long-tail play?

I never quite got it.