Amazon Goes Cloud To Cloud With Apple On iPhone 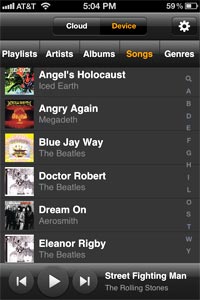 Developers and advertisers gripe about fragmentation in the mobile space all the time. What about fragmentation for consumers? The jagged way in which many of the consumers’ own trusted brands have to navigate the shoals of corporate rivalries across mobile devices is becoming tiresome.

I like using my Barnes & Noble and Kindle readers on my iOS devices because I also have e-readers where I want to access those same books. But in order to browse and buy books from these respective services I have to go directly to the native devices or use the Web to buy and push content to the apps. Apple’s rev share plans and restrictions on in-app purchases fragments my mobile experience.

There are many times when I literally am using the iPad Safari browser to access Amazon and B&N sites just so I can make a book purchase there and have it show up in their respective reader apps elsewhere on the iPad. Amazon doesn’t even allow the Nook app into its formal app store. You have to turn off download restrictions and find another way to get the app installed.

We are somewhere between an old world of media brand hubris and a new one where we increasingly expect competitors to play more nicely together to ensure consumer satisfaction. To wit, Amazon’s Cloud Player finally shows up on the Apple iPhone this week. Competing directly with Apple’s own iCloud and music-matching service, Amazon’s cloud services allowed me to upload my desktop library of music tracks way back last year sometime. But if I wanted to access them on an iOS device, I had to work through the kludgy Amazon Web site on my Safari browser. Now I get access to this uploaded music library from with an app that exceeds Apple’s own on-board iTunes.

While I can’t buy and discover new tracks seamlessly within this app, I can stream my music pretty effectively without having to download the tracks. This has been an issue with the Apple track-matching model since it was introduced last year. I keep a pretty lean iPhone generally, but having to download apps in order to play them was a space waster. Worse, Apple’s implementation of its iCloud on the phone deck is confusing. The Amazon app not only allows me to stream the track (with an option to download), it also delineates very clearly between what is on your deck and what is in the cloud. It also taps into your other tracks already on board.

All in all, while Amazon is slipping into enemy territory with an effective and convincing cloud player rival, the absence of in-app ordering and discovery just underscores the reality of mobile. Rivals can only go so far on the competitor’s platform. For media businesspeople that all seems sensible and understandable. But why should consumers care? In the cloud age, increasingly consumers will demand that these platforms drop what feels like pettiness that comes at the expense of user experience. You can’t make an industry promise of accessing my media (and that should include facility to buy and discover) everywhere and deliver a kinda-sorta reality.