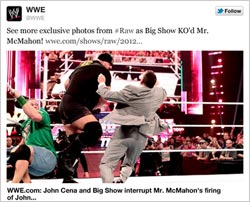 Along with other recent steps, including the launch of Tailored Trends and curated “hashtag” pages, the company continues to transform itself from a simple messaging service to a media-friendly marketing platform.

The launch of expanded Tweets underscores that trend by allowing users to preview stories, images and videos linked within tweets on both the desktop and mobile versions of the service. Previously, this was only possible with videos from YouTube and images from Instagram.

For content such as articles, Twitter will display an image, the headline, a 280-character summary that is separate from the 140-character tweet, and a headline plus a link to the writer’s Twitter handle. Videos can include a video gallery of related videos below the main posted video that users can scroll through and click on within the tweet.

The new feature launched with a small number of publishers, including The New York Times, BET’s 106 & Park, WWE, Lifetime and Dailymotion. It’s expected that Twitter will eventually enhance content capability to publishers and brands more broadly on the site.

“We’re excited to test expanded Tweets on behalf of our clients,” said Blake Cahill, president of social-media agency Banyan Branch. “It has a very Pinterest-esque look, and will be great for sharing fresh visual content or previewing links we'd like users to visit.”

But expanded Tweets also have the advantage for Twitter of keeping people on the site longer if they don’t click through to a linked site or landing page. “Some brands may be reluctant to take part and allow people to consume media entirely within Twitter rather than at their own sites, where such interactions can be better monetized,” noted David Berkowitz, VP, emerging media at digital agency 360i.

Noah Mallin, group director, social marketing at Digitas, agreed -- but said monetization might work better for certain types of content within tweets. A video played within a Tweet could still be monetized, for example, but it would be more difficult to do so with static content.

“Publishers will have to balance increased visibility in the Twitter stream with ensuring the headline, image and synopsis are compelling enough that a user will click through for more, rather than getting everything they need from that first view," he said.

The debut of expanded Tweets followed on the heels of Twitter’s introducing “hashtag pages,” where editorial staff at the company curate pages tied to events to help boost discovery. The pilot program kicked off this month with launch partners NASCAR and Turner Sports. Twitter is creating a landing page for searches on the term #NASCAR in connection with the Pocono 400 race.

The page provided an “enhanced live event experience” by offering a portal populated with curated tweets and photos from influencers within the NASCAR community, including drivers.

One immediate benefit of the curated pages is that they enhance the two-screen viewing experience for TV viewers for live events. What’s the opportunity for brands? The 360i report suggests the expansion of hashtag pages to other live events could provide major event sponsors -- like Coca-Cola’s sponsorship of the recent "American Idol" finale -- an effective tool for generating buzz.

The 360i report also indicates that brands may at some point be able to sponsor hashtag pages directly, although Twitter hasn’t yet discussed that possibility.

Like hashtag pages, the launch of Tailored Trends reflects the effort to tame the information flowing through Twitter via an algorithm that surfaces the types of trends of most interest to individual users. Before, people could only see -- through the Trending Topics feature -- what the top subjects and hashtags were based on velocity at any given time.

Digitas’ Mallin suggested Twitter could go farther, using its algorithm to alter users’ streams to emphasize those tweets it thinks are most relevant. That would be similar to how Facebook uses its EdgeRank algorithm to shape what people see in their news feeds.

Again, Twitter hasn’t announced such a step. But Mallin advised in a new a report that brands should prepare for some of the challenges that have emerged on Facebook, “where a Like only guarantees visibility to the users for a short period of time before the algorithm determines whether (based on engagement) the brand is still relevant enough to be shown consistently in the user’s news feed.” That makes posting rich, engaging content all the more important, he concluded.