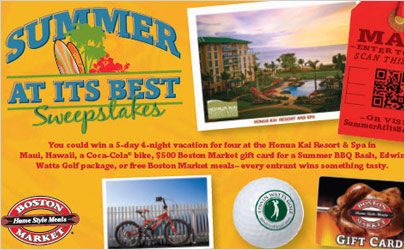 Boston Market has launched a series of summer promotions that mark the start of efforts to reestablish itself as the go-to source for “wholesome” out-of-home meals and attract a younger generation of consumers.

The promotions, touting Boston Market as the “Unofficial Sponsor of Summer,” tie into summer sports activities:

*Between June 20 and July 29, children 12 and under who visit their local Boston Market stores dressed in their team uniforms will receive a complimentary dessert with any kids’ meal purchase.

* Between June 25 and July 29, the brand will offer a “Summer at Its Best” sweepstakes, featuring a grand prize of a vacation for four in Maui and other prizes, including sporting goods and gift cards. Guests can enter by using their mobile phones to scan a QR code available in any of the chain’s restaurants, or by visiting its site.

*Between July 16 and July 20 (coinciding with the Tour de France), Boston Market will offer all customers who ride a bicycle to one of its U.S. locations and purchase an “individual meal” and drink a free additional individual meal of equal or lesser value.

*In August, the chain will host a special event hosted by “one of extreme sports’ most notable athletes” (not yet revealed), along with another nationwide deal.

The chain is also promoting a summer menu featuring chicken and other barbecued offerings (using a new sauce introduced last year), to encourage consumers to think of Boston Market as an easy, nutritious solution for the dinner table, picnics and all kinds of sports and other summer activities.

"I believe very strongly that the Boston Market brand has the ability to reclaim the position it owned 15 years ago, when it reinvented the home meal replacement category," new chief brand officer Sara Bittorf told The San Francisco Chronicle. "It wasn't just the people who sold you food, it was a solution to your everyday dinner dilemma. It made your life a little easier. We've lost a little bit of that over the years."

Now owned by an affiliate of Sun Capital Partners, Boston Market does not release its financials, but it has clearly been significantly impacted in recent years not only by KFC and Chick-fil-A, but the ubiquity of rotisserie chicken in supermarkets and club warehouse chains—and even more by competition from burger, Mexican and Asian QSR chains, Darren Tristano, EVP of the Technomic foodservice industry research firm, noted to the Chronicle.

According to Bittorf, Boston Market is planning to add more new menu items in early 2013. Furthermore, the brand -- which offers catering -- is testing delivery in New York City and trying to figure out how to make delivery possible in less-dense areas, as well as looking at offering food trucks.