Once More To The Breach: Windows Phone 8 Emerges 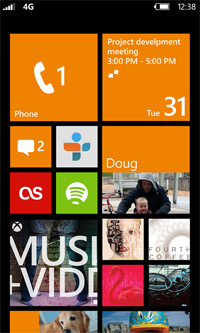 There actually was a time when Microsoft essentially owned the term “smartphone.” Of course, those of us who struggled with those early silver slabs with candy-dot keypads didn’t find them all too smart. The company’s insistence on extending the Windows look and feel to the phone was tortuous. Compatibility at the extreme expense of usability.

We are pretty sure that somewhere deep within the nether reaches of Apple during the iPhone’s development there were posters of the old Windows phones with the legend “What Not To Do.”

With the last iteration of its Windows Phone interface, Microsoft seemed to start reversing the polarity of its original scheme and use the lessons of the touchscreen to inform the design and functionality of its beta versions of Windows 8. But now that the next desktop/tablet OS is near completion, Microsoft is giving us sneak peeks at what the corresponding Windows Phone 8 will look like.

At the Windows Phone Blog Joe Belfiore says that the smartphone OS is based on the same core technology as the desktop and tablet OS. The mobile version will share common networking, security, media and browsing tech, he says, as it also shares the same file systems.

In addition to multi-core processor support and larger screen resolutions (up to 1280x768) the OS will have near-field communications built right in.

As Mark Walsh outlines in Online Media Daily today, Microsoft is planning a ‘Wallet Hub’ -- which echoes Apple’s own Passbook -- that it will include in iOS 6. In this case, however, we do know that the OS is already wired up for NFC and has worked out that the all-important “secure element” (encryption, etc.) will reside on a removable card.

It appears that this makes Microsoft ready to play with a number of third-party payment providers like the ISIS consortium of hardware, carrier and credit card companies. Google’s first foray into m-payments on its own phone and in concert with the one non-ISIS member Sprint seemed to cut it off from other players.

If the OS is already wired up for NFC, then it begs the question of how Microsoft plans to plug in to the security and payment systems being built by the ISIS consortium of hardware, carrier and credit card companies.

There will be more personalization of the tile-based interface for users, but much of the pitch from Microsoft now is aimed at developers and their support. A new 30DaystoLaunch program is offering to help app makers build and distribute their apps in a month’s time.

The company claims that the code sharing across Windows 8 desktop and phone will allow for much more creative app development. The OS will support in-app payments, integrated Internet calling (VoIP), better multitasking background operations and compatibility with popular development engines for cross-platform deployments.

Microsoft also announced that its app market has surpassed 100,000 apps. High-profile apps from Audible, Chase and PayPal all have launched. Microsoft partner Nokia has helped bring Zynga titles in as well.

So the big question remains whether Microsoft has a chance in hell of making headway in mobile OS. It was believed that the partnership with Nokia would help drive the OS into the overseas market. But in the U.S. market -- and despite some positive words about Windows Phone 7 -- they just couldn’t make a dent.

My own thinking is that the soft underbelly of smartphones is Android, not Apple. And it is pretty squishy down there. As the Google fragmented OS becomes the default smartphone platform for millions a day, it doesn’t appear to engender a lot of deep loyalty. This is impressionistic on my part, but my sense from talking with my Android-owning friends is that switching to an economical alternative OS would not be a heartbreaker for most of them.

If Microsoft really can finally make that mobile-to-PC connection with multiplatform apps, then it seems to me they have a case to make. This remains a game that a third player can come to and win.