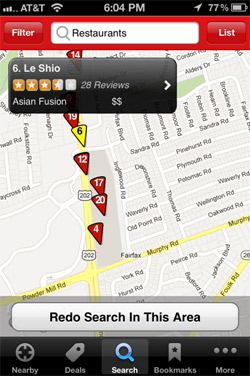 Even my otherwise mobile-averse wife knows how to use Yelp! "See if there is a good place to eat around here," she orders. "Yelp! It." Checking recommendations of nearby eateries is a reflex now. We use it not only to check the options, but to get good hints about best dishes. I imagine that people use foursquare and others. But the arrival of geolocation and apps is surely changing the way many of us make dining decisions.

In fact, according to a new NPD study, 6% of all restaurant visits during the first quarter of 2012 were influenced by online marketing in one way or another. And these diners were responsible for 8% of spending at the establishments. Apparently, most people are not quite like me and my wife. A consumer survey of diners that was also conducted by NPD found that recommendations were actually an influence among only 14% of respondents. Deals and special offers were the key influencers 37% of the time.

Unfortunately, NPD does not break this down by platform, so we can’t tell yet how much of this restaurant lookup activity is taking place on smartphones and how much is on desktops. But the results certainly point to the direction that restaurant marketers need to take if they want to pump up their efforts within apps. Second to deals, menu details (30%) also drove visits. In my experience, this is a choke point for many apps in that the digitized menu is rarely standardized -- and often is the point in the discovery process that pushes you to a PDF or an unoptimized Web site. It makes a difference. While Yelp does not deliver menus, Google-owned Clever Sense’s Alfred does. The menus are often nicely formatted and give me greater confidence in making a choice.

NPD also found that digital investment pays off in customer acquisition, since 26% of those influenced by online marketing were first-time visits -- double the rate of overall visits to a restaurant.

Online marketing still influences quick-service restaurants in the vast majority of cases, which may explain why the role of recommendations is so low and deals are so high. Still the share of casual dining visits influenced by online marketing far exceeds the one in ten of restaurant visits to casual spots.

I expect that as smartphones become an even greater force in this segment we may see a greater focus on casual dining and so recommendations and the role of discovery.