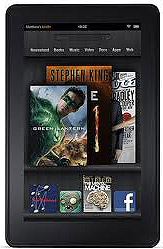 Conventional wisdom has it that enthusiasm for the Amazon Kindle Fire has diminished considerably since the 4+ million-unit holiday sales season the tablet was said to enjoy in 2011. Recent analyst reports suggest a dropoff this year, even as rumors persist that a larger screen (no, a real iPad-killer this time, really) is on deck for holiday 2012.

This may explain Amazon’s relative neglect of the Fire since its launch, but it doesn’t excuse the company. Too bad. They had the opportunity to give itself and the Android OS a real jump on Apple’s rumored half-sized tablet. The last six months would have been a great time for Amazon to encourage and promote developers to explore the potential of the half-sized tablet real estate.

What we have instead more than half a year since the Kindle Fire’s release is an e-reader with benefits. I have kept the Kindle Fire at my bedside all this time, with occasional walks to the living room during prime time to see how it slips into my device-centric life. My overall sense now is that it is a very good book reader, an app platform only in a pinch, and a frustrating Web device.

The state of Amazon’s apps, many of which really start as Android smartphone apps, is poor. Many of them continue to feel like oversized phone apps. From a developer’s point of view this is understandable, since rethinking content for every screen size is cost-prohibitive. But from a consumer’s perspective (this one’s, at least), there is the persistent feeling of wasted space and opportunity to many of these apps.

ESPN’s ScoreCenter not only seems formatted like a stretched Android app, with a lot of center dead space as a result, but it even carries mobile phone-sized banners that occupy a shrunken section of the screen bottom. The same is true for E!’s app. All of the bottom menus are scrunched to the left half of the bottom rail. Even Facebook’s app just stretches its m.facebook.com mobile Web experience across the wider expanse of the Fire screen. No one seems to think it is worth the bother to explore what is and is not possible about a 7-inch screen.

Again, this is understandable, but I suspect it means that tablets at this scale will struggle to endear themselves to users as more than e-readers with a super-sized smartphone experience. This is made all the worse by an Amazon-forked Android interface that silos the book, app, Web, music, video and docs experiences in a way that feels as jagged as the halting screen performance and leaden touchscreen response.

In short, the weaknesses of the Kindle Fire have not worked well, and Amazon has not rushed in to update any aspect of the device and give us a sense that it truly supports this device and form factor. Or maybe the company is distracted at the prospect of the 10-inch tablet it wanted all along. After all, there is an iPad to kill…again.