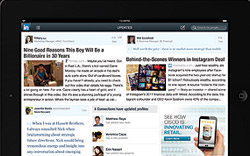 Well received when launched in April, LinkedIn’s iPad app bears little resemblance to its Web site or smartphone apps. The design more closely mirrors that of personalized magazine apps like Flipboard, with slick graphics, a calendar widget and an “updates” page featuring a news digest of shared stories and status updates. Users can also swipe to access different sections.

While LinkedIn provided few details about the ads it is testing, a screenshot of one of the new ads for Cisco shows what looks like a standard 300 x 250 unit on the right side of a user’s updates page.

Like other companies such as Facebook, Pandora and Zynga, LinkedIn is scrambling to adapt its business model to catch up to a burgeoning user base on mobile devices. During the company’s first-quarter conference call in May, LinkedIn CEO Jeff Weiner said 22% of its visitors as of the end of March came from mobile devices, up from 8% a year ago.

He also said the company was in the early stages of testing various forms of mobile monetization, suggesting LinkedIn would like to extend each of its revenue streams -- advertising, subscriptions, and fees for recruiting services—eventually to mobile. Weiner indicated that user engagement levels in both the company’s smartphone and iPad applications were high, a factor likely to interest advertisers.

LinkedIn declined to say when advertising would be launched widely in the iPad app or what formats or type of pricing might be available. It’s also not clear when the company might begin running ads in its apps for the iPhone and Android devices, among other smartphone platforms.

A study released Thursday by mobile ad network InMobi and mobile agency Mobext estimated there are 29.5 million tablet users in the U.S. or 11% of the total population. Among other findings, it said 60% of tablet owners spend 30 minutes each day browsing media content, and more than half (52%0) use a tablet to fill what otherwise would have been “dead time.”

Among social networking properties, LinkedIn ranked third behind Facebook and Twitter across the mobile Web and apps as of March, with a U.S. audience of 7.6 million, representing 7.9% reach in the category, according to comScore. LinkedIn has more than 160 million registered users worldwide.