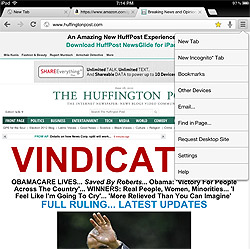 It is surely too early to tell only an hour or so into testing Google Chrome browser for both iPad and iPhone. Google dropped it into the App Store yesterday. But I think I may consider ditching Safari. Well, except when a hot link forces the native browser to open. Apple doesn’t give users the option to change default browsers. Actually, I am not sure what skullduggery or impish prank is going on at Apple, but a simple App Store search of Google Chrome brings up a long line of results, and the one you really want is dead last on both iPhone and iPad. Hmmm.

According to some reports, Chrome is not able to use its own rendering engine to accelerate performance on iOS, but has to use the engine Apple forces upon third parties. I am supposed to see a performance hit from slower Java rendering. But in my use I was happy with the overall snappiness of the page loading. In a head-to-head I will say that Safari seemed to outperform Chrome, but not enough to make me wince.

The pluses come in the feature set. Chrome has easily accessible voice commands. It recognized most “XXX.com” commands with a direct load of the target page. Even more welcome is the synchronization across all of your devices. The Bookmarks that Chrome has synched across my Desktop and laptop are available now on all devices. In fact, I can bring up a list of all the other devices and peruse the recent browsing history on any one of them. And even better, the synch carried some of my saved passwords across the installations.

The incognito mode for private browsing is all the more important on an iPad, which still gets shared in most families.

I have more than a few complaints that may keep me from making Chrome my standard browser. The bookmark interface is one extra tap away on the iPad compared to Safari’s. Like its desktop cousin, Chrome insanely does not allow for a bookmark sidebar. On a touch interface, shouldn’t a slide-in bookmark bar be a no-brainer? In fact, shouldn’t all of the tools be customizable so they could be repositioned as tabs on any edge of the app window so the user can make the interface adapt to his or her own handedness or use patterns?

The one thing that Chrome for iOS does make clear is that the battlefield over these device OSes will be in the cloud as much as on the device. Google also released an app for its online Drive storage service. As a user, the cloud is impressing me more as I come to expect its functionality. The idea that whatever I was doing on one machine should be available to me on another is becoming de rigeur in my habits. The notion that data is tied to a device increasingly seems silly and unnecessary.