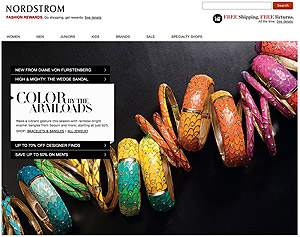 How many $600 handbags can one city stand? That’s the big question for retailer Nordstrom, which just announced it would finally open a full-line store in New York City.

The Seattle-based chain’s intentions to do so have been public for years, but now that it’s moving forward, experts are speculating just how well the newcomer will do when it opens its doors in 2018. The new location, a 285,000-square-foot location on 57th Street, was once home of the original Hard Rock Café. Located on the West Side, a slight risk for a luxury brand, it will still be within (relative) spitting distance of Bergdorf Goodman (owned by Neiman Marcus); Saks Fifth Avenue; Barneys; and Henri Bendel (owned by Limited Brands) as well as scores of boutiques selling duds from the same designers.

Some experts have speculated that partnering with those high-end brands, already so well represented in the area, may present challenges as Nordstrom moves forward.

Nordstrom is no stranger to the New York: Of its 117 full-line stores, many are in New Jersey and Connecticut, as well as suburban Westchester and Long Island. And in Manhattan, it also operates two Jeffrey locations, a Nordstrom Rack, and a charity shop called treasure & bond. (Located in SoHo, it’s where Nordstrom chose to make its big announcement.)

The flagship store will be seven stories, its tallest. And the development will also include “a distinctive mixed-use, retail, hotel and high-rise residential tower,” still in the planning stages. Extell, the developer, assembled the parcel, which includes 40,0000 square feet of a block-through site, to 58th street, for more than a decade.

"This has been a long time coming for us, as Nordstrom has sought a NYC location for many years. We couldn't be happier about the opportunity to be a part of this terrific development project with Extell and feel the location works extremely well for us," says Erik Nordstrom, president of stores for Nordstrom, Inc. in a press release. "We look forward to opening our doors and we view this as our chance to have our best Nordstrom store in the best retail city in the world.”

Women’s Wear Daily points out that while Nordstrom will face many challenges, the biggest may well be in shoes, typically one of Nordstrom’s strengths. (The chain began as a Seattle shoe store in 1901.) Well-heeled New Yorkers know the city is in the midst of  “a prolonged retail shoe war,” with Macy’s currently building what it says will be the world’s largest shoe floor; Saks Fifth Avenue expanding its 10022-Shoe floor; and Bergdorf Goodman’s recently expanded shoe salon. Barneys is also revamping its shoe floor, WWD reports.

Pam Danziger, president of Unity Marketing, thinks the store will be an instant hit. “Shoppers in NYC will be so welcoming to the arrival of Nordstrom,” she tells Marketing Daily. “Nordstrom will be a great addition to the shopping scene and certainly give some of the other luxury stores a run for their money.  Shoppers everywhere appreciate Nordstrom service and selection. It is a great place to shop everywhere I have visited, and it will be a great place to shop in New York.”

Nordstrom, a brand that is slightly more practical than fashionable, with an extensive emphasis on customer service and its 100%-satisfaction guarantee, came in first place in the most recent national ranking of department stores from the Luxury Institute, beating such names as Bergdorf Goodman, Barneys and Neiman Marcus.