IAB Rising Stars Get Touchy, Feely and Even Respectful of Users 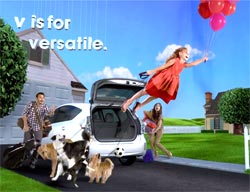 There was a time in digital advertising when just about every conference panel engaged the question, “What was the last Web ad you recall seeing?” The joke, of course, was that it was a trick question. Banner ad creative was so abysmal in the first decade of the Web that it bred a small cottage industry of jokes.

No one could recall any of the risible executions that passed for advertising, and even if you could, no one would remember that whack a mole animated banner, and no one would cop to remembering it. Did you hear the one about the ad tech salesperson who walks into a digital agency and asks the receptionist, “Can you direct me to the person responsible for building your agency’s Web ads?”

Given the sorry legacy of Web advertising, you have to applaud any attempts to bring genuine creativity to the platform. Both the IAB with its Rising Stars program and the Online Publishers Association (OPA) and its distinct ad units have been campaigning for better Web campaigns for years. Much as I appreciate the effort, I am not always pleased with the results.

In some cases, “more creative” units really denote more invasive ones. I find the push-down technologies, for instance, especially troublesome because they actually yank the Web page I am scrolling right out from under my mouse when they retract. Some other overlays and interstitials leave many users scrambling to find the Close command.

It is good to see that the Mobile Rising Stars the IAB has chosen for promotion as possible standards for publishers are more tame and elective than some others we have seen on the Web. The Rising Stars program in the next three months will bring the developers of these units together with the IAB and the Agency Working Group to develop specs for deploying these engaging ad units across mobile operating systems, apps and the mobile Web at scale and with consistent results. The IAB has released five such formats for public comment.

The five units are available for viewing and include:

A mobile filmstrip that allows the user to swipe across thumbnails of brand images and videos both on smartphones and tablets. The unit effectively brings the brand assets into the ad rather than requiring a jump -- something especially important in mobile.

The Pull unit that lets the user do a window shade-like drag maneuver on a banner to pull in more full-screen information, again without a jump to a site.

The Adhesion Banner that keeps a banner ad attached to the mobile screen despite scrolling.

The Full Page Flex unit that is specifically for tablets, which can adjust creative experiences for both landscape and portrait modes and can accommodate a full range of multimedia assets with respectful use of bandwidth.

And The Slider unit that enables the user to swipe a mobile banner laterally to pull in a full-screen ad experience.

All of these units have the distinct advantages of leveraging touch to keep the user both engaged and in control. All are elective formats that don’t overwhelm the user or make them wish they hadn’t loaded that app after all.

Even more to the point, the ads have learned what so few Web ads have not -- users don’t want to leave the place they elected to be. Think about just how stupid the click-through is in the larger scheme of media experiences. When have we ever developed ad technologies that go beyond interruption to actual kidnapping?

iab, iab mobile, mobile
1 comment about "IAB Rising Stars Get Touchy, Feely and Even Respectful of Users ".
Check to receive email when comments are posted.
Next story loading