Burt's Bees Cuddles Up To Babies 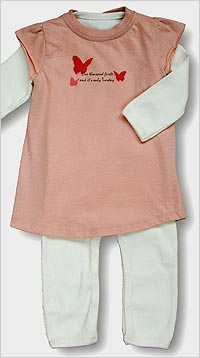 Burt’s Bees, already a powerhouse organic brand for the masses, is rolling out Burt’s Bees Baby, its first foray beyond personal care products. The new line, which includes apparel, accessories, bath linens and gift sets, is already on sale at Target, and will be introduced in other retailers next month. Eventually, the Clorox-owned brand says, it will expand into “multiple categories across baby, home, and lifestyle.”

Aiming to make it the #1 organic baby brand in the world, Burt’s Bees is skipping the environmental elite and heading right toward populist price points:

That mass approach is possible, Maria Nyline-Asker, president of Burt’s Bees Baby, tells Marketing Daily, “because technology has really changed. People may expect they’d have to pay twice as much for organic baby clothes, that there’s this mass fundamental divide. But in reality, our line is only about 20% more than a brand like Carter’s,” she says. “And the quality is so changed from people’s early perceptions of organic. From the hand touch or look of the product, you would think it’s of equal or greater quality. People used to think organic meant it had to be beige and look terrible on the hanger.”

The company says the line, produced in a licensing partnership with Ayablu, Inc., will eventually extend beyond newborns to cover toddlers and children, as well as gifts, linen, gear, an expansion of its bath and grooming products, toys and even furniture.

It says it will be available at buybuy Baby and BabiesRUs.com by August 1, and then on a new website,www.burtsbeesbaby.com, in September.

While sales of organic clothing and fibers are still quite small compared to organic foods and personal care, they are growing fast. In its latest analysis, the Organic Trade Association says U.S. sales of organic fiber shot up 17.1% percent to $708 million in 2011.

Asker says the company will introduce products to moms via social media and public relations: “We’re really focused on the digital space, a celebrity approach, and editorial mentions.”

apparel, retail
1 comment about "Burt's Bees Cuddles Up To Babies ".
Check to receive email when comments are posted.
Next story loading