Next Issue Puts Print On Tap For Serious Mag-aholics 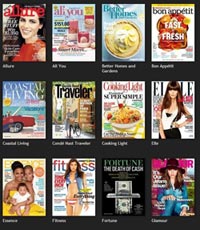 Those of you who forgot long ago what the hell Next Issue was up to can be forgiven. This consortium of magazine publishers in search of a digital magazine model has been threatening to launch something of substance since before the iPad arrived.

Led initially by Time Inc. veteran John Squires and now by former Tivo head Morgan Guenther, the project was supposed to come up with both business models and digital publishing formats for the then-unlaunched tablet platforms. More than two years and 60 million iPads later, the company finally brought something substantial to market in recent months -- first on Android tablets and just this month on the iPad.

Next Issue was organized by all the major magazine publishers, including Time Inc., Conde Nast, and Meredith. But while Next Issue was figuring out what it was doing, each of the member companies took their own paths in launching individual titles on multiple other publishing platforms into the iPad.

Coming late to the party, the company really had only one model it could pursue, the smorgasbord. Next Issue for iPad is a shell app that allows you to pull in selections from the catalog and access those magazine’s recent back issues. With almost three dozen titles in its catalog, including People, New Yorker, Popular Mechanics, Parent, WIRED and Sports Illustrated, many of the heavy hitters at the newsstand are in the initial catalog. For $9.99 a month you get access to most of them, with a $14.99-a-month plan for the main catalog as well as EW, People, SI, New Yorker and TIME. Alas, you cannot subscribe to the service from within the app itself. This requires the kludgy maneuver of signing up at the Web site and authenticating in the app.

Next Issue actually launched for higher-end Android tablets a couple of months ago, but not so anyone might notice. It is too resource-intensive for the Kindle Fire and Nook Tablet/Color lines, which have the deepest market penetration of any Android-powered models.

My impression of the app on iPad is not half bad. Generally, the magazines use the same interactive interfaces and enhancements as their stand-alone counterparts, although they live within Next Issue’s all-in-one app. The company contends that having all of the magazines in a single app is just more convenient than individual apps. Maybe, but not by much. Each title has its own page of current and back-issue thumbnails, so it is not as if the app gives the magazine reader many tools for aggregating content in unique ways.

It is just a big honkin’ digital newsstand, really. While not quite as smooth as the performance these titles enjoy in their stand-alone apps, in most cases the magazines performed well.

But at $120 and $180 a year for the basic and premium subscriptions, respectively, the model appears to be pitched to serious mag-aholics only. Just do the math. How many individual digital magazine subs does one need to carry to make this smorgasbord worthwhile -- seven or eight? Worse, if you are that much of a mag-aholic then you likely already have some of these subscriptions you acquired separately. And those subs aren’t transferrable here.

To be sure, Next Issue’s smorgasbord approach surely will encourage sampling of new titles, but only if the subscriber already buys in to the hefty price. A 30-day free trial seems designed to acclimate users to the value of a flat monthly fee for access to three dozen or so titles, although how many of them really can be relevant to any one reader?