Starz Lets Users Be The 'Boss' 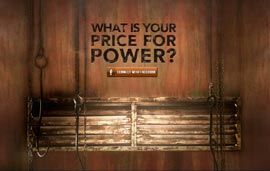 Television shows are constantly trying to create characters and situations that an audience can relate to. But for the second season of Starz’s “Boss” (in which Kelsey Grammer plays Tom Kane, a fictional mayor of Chicago), the network has created a social experience that shows exactly the price one has to pay for power.

The marketing program (aptly called “Price for Power”) leverages people’s Facebook information to create a video (using characters and situations from the show) in which the user runs for Illinois governor. The program uses real-world friends and interesting connections to depict a virtual world where compromises must be made: peddling influence, cutting deals and becoming the subject of press scrutiny.

All the while, the video pulls images and information from a public profile (a profile photo, for instance, is used for campaign materials), and, as scandal erupts, friends begin to turn by sending irate messages and threats. By the end of the video, the user’s friend count eventually drops to zero. (The video creates different scenarios at separate times, giving people opportunities to see more than one scenario.)

“It immerses consumers in the crazy world of Tom Kane and gives them a personalized taste of the show,” Kelly Bumann, senior vice president of digital marketing for Starz Entertainment, tells Marketing Daily. “It is the kind of thing you want to do a couple times and because it is so personalized, something you will want to share with friends.”

Using the public information people put on Facebook will also help build buzz for the program (which begins its second season on Aug. 17), which is an important element in creating a successful television program in these media-fragmented days, says Erin Dwyer, executive director of digital marketing for Starz Entertainment.

“Social media is about telling the world about your life and connecting it with others -- to get people engaged you need to involve them, not talk at them,” Dwyer says. “Social is key to marketing as long as you look at it through the lens that we are entering the consumer's world and must play by their rules to succeed. We have to provide something with credibility and a level of entertainment and social currency that is worth their time -- and most of all, their advocacy if they choose to share.”