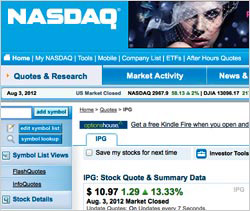 Interpublic Group shares were up 12% to nearly $11 on market speculation that Publicis Groupe was preparing a takeover offer of at least $6 billion for the company.

The initial report that triggered the speculation was a blog published by the Financial Times.

The IPG trading activity passed a certain threshold that triggered a call to the holding company from the New York Stock Exchange, where the company’s shares are traded, requesting that IPG issue a statement addressing the speculation.

According to sources, if the company was aware of a big transaction that was moving its stock, it would have been required to disclose it once it got the call from the NYSE.

IPG responded with this statement: “We are aware of the activity in our stock today. It is our policy not to comment on market rumors or speculation.”

A Publicis rep could not be immediately reached for comment. According to sources, however, the company has discreetly let it be known that as of Friday, it was not in conversations with banks about a big transaction. To acquire control of Interpublic, sources said, such talks would have to be occurring.

But according to sources for the FT report, such talks are taking place between Publicis and unidentified banks.

At least one analyst -- Pivotal Research Senior Analyst Brian Wieser -- believes Publicis may be making a move. “We think the reports are credible,” he stated in a note issued Friday as IPG’s stock was rising. “While a sale is by no means inevitable, we have repeatedly argued [that] further industry consolidation is inevitable.”

The speculation comes shortly after both companies reported lackluster financial results for the second quarter. IPG posted organic revenue growth of under 1%. Publicis Groupe’s growth was only a tad better:1.6%. By comparison, Omnicom posted 5.1% organic growth.

Publicis would have many reasons to acquire IPG, Wieser stated in his note. Chief among them: CEO Maurice Levy’s interest in making the company the biggest global advertising powerhouse he can before he retires. Also, a merger with IPG would reduce Publicis’ “dependency on the slower-growing European market,” while expanding its reach in the U.S. and rapidly growing Asian and Latin American markets.