The Breeders' Cup To Live Large In L.A. 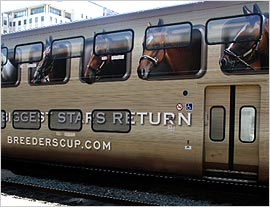 The Breeders' Cup horse racing series is about three months away, and the series organizers are already about the business of building buzz and making sure that the two-day, 15-race event is a prestige happening that transcends horses and betting chits. It helps matters that the race is returning to the Santa Anita track in Los Angeles after two years at Churchill Downs, the Mecca for horse racing and a venue that pretty much guarantees that any efforts to turn the Breeders' Cup into something urban/cosmopolitan will be reined-in, so to speak.

It also helps the Breeders' Cup's efforts to expand the event beyond "inside baseball" (or its equestrian equivalent) that the races will be televised primetime on NBC.

Peter Rotondo, VP of media and entertainment at the Lexington, Ky.-based Breeders' Cup, tells Marketing Daily that NBC Sports will air the race at 8 p.m. on Nov. 3. "It means more exposure than we have ever had," he says, adding that the race had been carried on ESPN and ABC, but who have since backed away from horse racing. NBC, which already carries other top-tier races like the Triple Crown, will carry Breeders' Cup again next year when the race returns to Santa Anita.

On deck in L.A. are some guerrilla marketing tactics to build awareness in coming weeks: the Breeders' Cup and Metrolink are, for example, doing wraps in Los Angeles to make a train car look like a horse car. And 10 days out from the event the Breeders' Cup will host a press conference at LA Live with the city's mayor, welcoming the Breeders' Cup to Los Angeles. There the organization will unveil an interactive 3D street art painting.

Rotondo says the biggest sponsor this year is Grey Goose Vodka, which will activate at the race track. He says race week at the track is also a much more elaborate affair than at races past. "We took a step back and looked at our messaging through the years and felt this was time to take it to the next level. We are calling it the "Taste of L.A.,'" he says. He says the Breeders' Cup brought in New York-based architectural and design firm M (Group) to create a venue-wide motif. "There will be jazz bands, a food festival with top L.A. restaurants represented, a fashion contest, restaurants, turf terrace."

There is also a new premium lounge area on the track apron, against the rail. High-end, daily-deal type site Urban Daddy is also promoting the race, per Rotondo, who says the group is offering packaged deals around the race to some four million subscribers.

Around 100,000 people are expected to attend over the two days of the series, and, per Rotondo, all premium tickets have sold out. "We are defintely tracking ahead of last year."