The IRC Goes Social With Hyper Island And Gyro 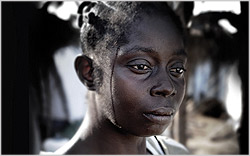 The International Rescue Committee, a global top-five NGO that serves refugees and those fleeing disaster, conflict and oppression, is launching a crowdsourced program called "The Domestic Violence Think-In.”

The program, the largest to date for the 80-year-old organization, brings 450 students to the Stockholm-based training facility Hyper Island to receive a four-day assignment: come up with a campaign that will raise awareness, support and donations for the IRC’s work stopping domestic violence in developing countries.

Students will be required to crowdsource thoughts and opinions, all to start a digital conversation about the topic. After four days, the students will create a video explaining their ideas, which the IRC will consider using for future efforts. Below are all of the details.

During the session, which will be led by Gyro, a global creative agency that works with the IRC and a long-time collaborator with Hyper Island, the students will crowdsource ideas at Ircthinkin.com. They will be using Twitter (hashtag #ircthinkin), Facebook.com/ircthinkin and the video-sharing application Viddy.com to share what they learned and solicit feedback.

At the culmination of the project, the students will give the 70 strongest ideas to IRC and Gyro leadership. The consequent video will also go live at Ircthinkin.com. The IRC says the best ideas will be considered for the IRC’s next campaign. The organization says it will also give the compilation video to presidents and ministers of developing countries.

The goal, per the IRC, is to urge leaders to enact laws against domestic violence where no laws currently exist or to enforce the laws in the countries that already have protection laws. Domestic abuse is epidemic, with one-third of women worldwide physically, sexually or otherwise abused during their lifetimes, according to a recent report from the IRC.

Carrie Ross Welch, SVP of external relations at the IRC, tells Marketing Daily that the IRC has run successful traditional and social media campaigns around its core mission and tagline "From Harm to Home." She says the organization has also done campaigns around prevention of violence against women ("Wake Up"), and for many recent emergencies, including drought and famine in the Horn of Africa. The IRC is also running a large campaign called "New Roots"  in traditional and social media, around refugee community programs, per Ross Welch. The IRC also has a celebrity spokesperson in actress Rashida Jones of the TV program "Parks and Recreation" and the film "Celeste and Jesse Forever," whose New York premiere benefited the IRC.

Ross Welch says the Hyper Island program presented a great opportunity for the IRC. "As a highly efficient NGO that puts 93 cents of every dollar toward programs, we simply don’t have the resources to engage creative in every important issue we address or for the work we do," she says. "Who wouldn’t jump at the opportunity to have 450 young creatives focus on a neglected issue and how best to raise awareness around it? Our first goal for any campaign would be to raise public awareness, to get people talking, and thinking and wanting to learn more. Activism and advocacy follow." She adds that the IRC has never before done anything on the scale of the Hyper Island program.

"The IRC is known in the U.S., but we have only just started promoting ourselves and our work," says Ross Welch. "We have a long way to go before we are a household name. In the countries and U.S. cities where we have programs -- and of course, in the humanitarian community -- we have great brand recognition and are universally admired for our work."