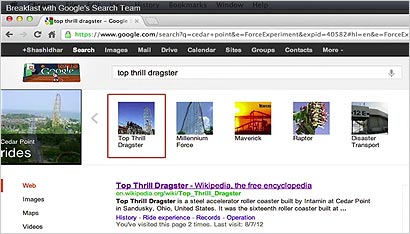 Are Google's engineers smart enough to sort through several technical challenges to make search the virtual assistant of the future? Calling the Web "the biggest repository of human knowledge," Amit Singhal, SVP and Google fellow, tells us about the more than 30 trillion URLs on the Web, and says that on any given day Google crawls more than 20 billion sites.

Google serves more than 100 billion searches monthly filled with information -- most useful, and some not so much. The Web might be the biggest repository of human knowledge, but search engines must understand the words in context and have the ability to sort through the accuracy of the information.

The most difficult problems Google engineers face involve security and relevance, followed by the ability to recognize speech patterns, and natural language for voice search, all underpinned by geographic location and the knowledge that one thing connects to many. That connection will determine search engine optimization in the future.

From Google, we typically hear all about the surface issues, but rarely the deep technical challenges. What about the privacy setting? With the ability to serve up emails from Gmail in search results, how do people know the correspondence won't end up plastered to the Web somewhere?

Singhal said Google will need to make search "truly universal." For example, Google began testing the ability for searchers to see Gmail emails in search results related to specific keyword queries. The results serve up collapsed, but it is important to clean out unwanted messages. Oh -- and for those who want to search for email on google.com, type the "keyword" followed by the word "gmail," such as "search gmail," to have the emails serve up at the top of the page. Think of the search engine optimization possibilities.

Google executives say that a better understanding of the world helps the company's technology serve up more accurate answers. That's a simplistic answer. Throw in a little human behavior and psychology to get closer to the truth. What percentage of the time does one search lead to another that is very similar?

Google's goal to get the correct information in front of searchers in a "fraction" of the amount of time it took previously could actually lead consumers to spend more time on the Web, as consumers keep clicking on images and videos.

Information becomes the means by which Google will create its search engine of the future, making sense of acquisitions like ITA Software, tying in weather conditions, and building out public transit routes and schedules.

This isn't just Google's challenge, but all those who license the company's technology, such as Ask.com. Bing faces these challenges, as well as others like Yahoo that license its search technology.