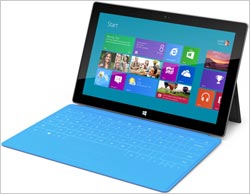 Microsoft may have a lot riding on its tablet versions of the Windows 8 operating system, but one market researcher thinks the odds are against them. This is not your grandfather’s PC market, London-based Generator Research declares in new forecasts that see tablet shipments doubling from 120 million units shipped in 2012 to 250 million in 2016.

The problem for Microsoft and for hardware makers, analyst Andrew Sheehy writes, is that tablet hardware does not follow the patterns of the traditional portable markets. For two decades it has been all about hardware -- making it smaller, faster, lighter but more robust in speed and storage. This simply is not the case with the tablet. “[It] requires that vendors come to market with an overall proposition that encompasses digital content, apps and supporting services,” Generator writes. This is not a strong suit of the Dells and HPs, nor arguably is it a strength of the dominant PC OS provider Microsoft.

Gadget geeks are gushing (and I know gushing gadget geeks raises a weird image) about the Microsoft Surface tablets and the prospect of a low-end Windows 8 RT device coming in at $199. But Generator warns that Microsoft needs content, apps and services as well as a compelling smartphone and even smart TV play to make an entire ecosystem. Otherwise, even the mighty Windows operating system will not be able to repeat its desktop success on tablets. “Unfortunately, of all the possible market outcomes, the one that says Microsoft will rise to dominate media tablets like it did PCs is not one that we foresee,” they declare.

I am less certain than Generator on this, although I think anyone taking on Apple at the 10-inch tablet scale is going to have a tough climb. The cross-platform compatibility of desktop and tablet under Windows 8 does give Microsoft a coterie of productivity and game developers who can craft apps with an eye to the tablet. This is something Google seemed to take a stab at with its Chrome Web apps program but never executed very convincingly. But Windows compatibility across desktop and tablet seems to me a strength you can’t ignore when handicapping this race. And while the Windows Phone play continues to languish, the company’s TV presence via the Xbox is not to be trifled with.

On the other hand, Microsoft is caught between a rock and a 7-inch place when it comes to form factors. The potential productivity and Windows compatibility strengths it has on tablets are most likely applicable to the larger-size tablets and are of diminishing relevance at 7 inches. But at ten inches it is pitted against a heretofore indomitable iPad. At 7 inches it battles Android and Kindle tablets, but I am not confident that Windows 8 compatibility will be much of a seller at that scale. In my use of 7-inch tablets they prove to be more like e-Readers with benefits or lean-back smartphones.

Without compelling media/entertainment experiences, I am not sure that Microsoft has a serious play in that space if the hardware gets scaled down to those sizes.