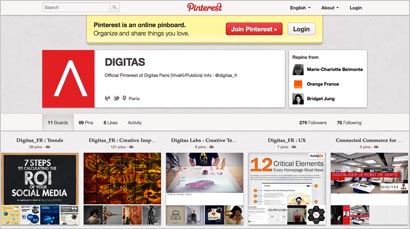 Pinterest may be the darling of the social media world, but it has not been widely embraced by agencies. A new survey by the Creative Group finds that only 7% of advertising and marketing executives said their firms are using the visual social network for business purposes and 44% have no interest in adopting Pinterest.

Another 18% had never heard of the site, and 17% said it caught their eye but they were hesitant about using it for work. Just 10% said they planned to start using Pinterest as a business-related tool. Staff at larger agencies were more likely than those at smaller agencies or companies to be on Pinterest. Among those with more than 100 employees, almost a quarter (24%) used the virtual pin board as part of the marketing mix, compared to 19% at those with fewer employees.

But a higher proportion of smaller firms planned to go on Pinterest -- at 30%, compared to 6% of large firms.

The findings were based on more than 500 phone interviews with 375 marketing executives randomly selected from companies with 100 or more employees, and 125 ad executives from agencies with 20 or more.

Pinterest enjoyed meteoric growth earlier this year, becoming the fastest stand-alone site to break through the 10 million unique visitor mark, according to comScore. As of July, it had 23 million monthly visitors. Its rapid rise also made it the next big thing on the shifting social media landscape and a new marketing vehicle for brands from fashion e-commerce site Bottica to home improvement chain Lowe's.

Still, the vast majority of agencies and companies are still on the sidelines.

“While Pinterest has attracted a large following recently, it’s still a relatively new site,” said Donna Farrugia, executive director of The Creative Group, which provides staffing services for design and advertising professionals. "Agencies, or any organization for that matter, may be hesitant to join the social network until they determine how best to use it given their businesses’ goals and needs.”

Among the large agencies on Pinterest are Digitas, Saatchi & Saatchi, Edelman, Wunderman, and JWT. The Creative Group also emphasized that the visual nature of Pinterest makes it a natural platform for agencies or individuals to showcase their creative work.