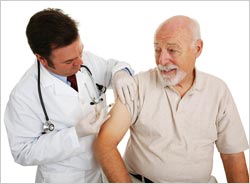 Following one of the mildest flu seasons on record, retailers are fighting for American flu-fearers. In the latest move, Walmart says it is expanding its immunization program to include shingles and whooping cough, and that it has hired a battalion of nurses to administer the vaccines.

The Bentonville, Ark.-based retailer, which claims to be the first national retailer to use registered nurses to administer vaccines, says it will now be offering 10 of the immunizations recommended by the U.S. Centers for Disease Control during flu events at 2,700 of its locations.

And flu and pneumonia vaccines will be offered at a total of 3,800 Walmart store locations. The company has hired the nurses through an agreement with Mollen Immunization Clinics’ nurse network, and says it will also use them to provide blood-pressure screenings at some of its immunization events next month.

Other drug chains are also trying to get consumers to roll up their sleeves. CVS and its Minute Clinics, with 20,000 pharmacists and nurse practitioners administering shots, is offering a 20% off shopping pass to anyone who gets a flu shot. (The Woonsocket, R.I.-chain is pricing its vaccine at $31.99.)

And RiteAid, which is charging $29.99 for its shots, is sweetening the deal by offering coupon booklets with more than $100 in savings, while supplies last. It’s also offering 25 points to members of its wellness+ loyalty program.

Earlier this month, Target was first out of the gate in promoting the new intradermal flu shot option at all its Target Pharmacy locations. And Walgreens announced no-appointment-needed flu shots, including round-the-clock availability at its 24-hour pharmacies. (The Deerfield, Ill.-based chain says it gave about one-third of all flu shots last year on off hours, including evenings, weekends and holidays.)

Retailers’ stepped-up bids for attention are the result of what is expected to a low-demand year for vaccinations. The CDC says last year’s flu season was both one of the mildest and shortest on record, in part because many consumers were likely still protected from flu strains covered in prior years’ immunizations.