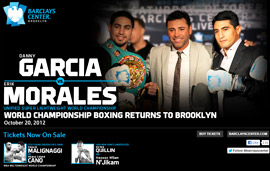 Brooklyn is the epicenter of skateboards, radical bicycle modification, offbeat motorcycle clubs, every cuisine on Earth and all variations thereof. It's the locus for international dance and performance art, has six times as many yoga studios as Subway franchises, and more tattoo parlors than plumbers. And now it has big-time professional boxing.

But can boxing make it in Brooklyn? Can it do it half a block from the Brooklyn Academy of Music, the antithesis of boxing if ever there was one? It had better. To mangle an old saw, if you can't make it here, you can't make it anywhere. The brand new Barclays Center is counting on making it, as the $1 billion arena will be the venue both for NBA hoops (the Brooklyn Nets) and top-tier boxing, under the aegis of Golden Boy Promotions and Barclays developer/Nets co-owner Bruce Ratner. The massive venue, which looks as if that hovering spaceship from Sector 9 crash-landed on Flatbush, will open its pod-bay doors next month to a Roman circus of Jay-Z and friends. It's hoping for as much noise with the big Oct. 20 bout, something of a three-ring circus itself -- as it has three title fights and a huge undercard featuring a roster of Brooklyn boxers.

Although it will be broadcast on Showtime, there is some risk: the first major sporting event at Barclay's Center, the showcase sporting event needs to have lots of screaming fans, and not too many empty seats. It has to be a meaty event, as it is sandwiched between the huge hip-hop opening on Sept. 28 and the just-announced Rolling Stones concert there in November. And, by the way, there hasn't been a major boxing event in King's County for over 80 years.

Even Golden Boy boss Oscar De La Hoya was at the Thursday press event, to tout the tripartite championship card topped with a junior welterweight redux between Danny Garcia and Eric Morales. Brooklynite Paulie Malignaggi, who pointed out that he was born down the street at Long Island College Hospital, fights Pablo Cesar Cano; and Peter Quillin, who comes from Floyd Mayweather's hardscrabble hometown of Grand Rapids, Mich. but has lived in Brooklyn for four years, takes on Hassan N'Dam from France, in a middleweight bout.

Sponsors are built in, as the return of the squared ring to Brooklyn is part of a deal between Golden Boy Promotions (and its partner brands) and Barclays Center. Corona (almost the first thing you saw walking into the press conference was a giant, inflatable Corona bottle), and DeWalt Tools, and AT&T, staples of Golden Boy-promoted events, are back. Brett Yormark, CEO of the 19,000-seat Barclay's Center, said there will be a number of events, marketing programs and promotional activity leading up to the fight.

For this year's huge Miguel Cotto vs. Floyd Mayweather fight, DeWalt did a point-of-purchase program in some 1,300 Home Depot stores, including contests, and radio spots. For that fight AT&T touted its GoPhone with cross-promotional ads.

To hedge their bets, the promoters and venue charged up the Oct. 20 undercard with Brooklyn-born (and -based) fighters, and it's a roster as diverse as the borough itself: New Yorican Luis Collazo; African-American contender Danny Jacobs, who has just come out of a two-year battle with cancer; Boyd Melson, a charismatic West Point graduate and one of the new wave of Jewish fighters; former world title contender Dimitry Salito, orthodox Jewish and Russian; and, of course, the Paulie, the Italian-American magic man, who was wearing more diamonds than all of 47th Street combined. Said Quillin: "I've been here for four years and all of the money I make doesn't equal being here and fighting in Brooklyn."

Said Jacobs, who fought back tears as he spoke about his bout with cancer, "To be in the first big fight in Brooklyn for over 80 years, the first fight at Barclays -- nobody can take that away from me, even if I never fight again."