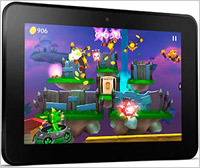 In the Torah-sized spec sheet that is the new Kindle Fire HD announcement, Amazon has buried near the bottom something that was not highlighted at yesterday’s Apple wannabe press conference with Jeff (no Steve Jobs) Bezos.  All of those dazzling Fire HD models with the hardware specs, slightly larger screen and exclusive content are ad-supported.

The model used previously on reduced-priced versions of the e-ink Kindle Reader is a part of the experience even for those shelling out up to $500 for tricked-out cellular versions of the app. To wit: “The new Kindle Fire family comes with special offers that appear on the lock screen,” the press release says.

Toward the end of last year, some models of Kindle with Special Offers allowed the user to remove the offers for a $30 fee. No word from Amazon whether such an option is available on the upcoming Fire offers.

So in the head-to-head comparison between Kindle Fire HD and iPad, it might be worth mentioning that the former is ad-subsidized. According to Amazon, inaugural advertisers include AT&T, Discover and Intel. The company emphasized that these are offers, not advertising per se. They say to expect things like $5 credits in the Amazon MP3 Store or for select titles in the Amazon Video Store. Likewise, the sponsors might offer special screensavers or Amazon credits when a user first makes a purchase with their new Discover card.

I find the inclusion of Special Offers, and their being apparently mandatory, curious. After all, what other major smartphone or tablet device in the market comes with a built-in ad model from which there is no escape? It seems one thing to offer an ad-supported (or “offer-supported”) tablet or e-reader for a reduced price. And it is another thing to craft ad networks that run into the apps in your ecosystem, as both Apple and Google have done. But baking it into the hardware for everyone and without an option is different.

Does Amazon think people just won't notice or care? Is the revenue upside that great? Doesn’t it underscore a key difference between the iPad experience and the Fire experience from the beginning? The iPad acts like a media consumption device. From the start, Fire’s design felt closer to a content merchandising and sales tool.