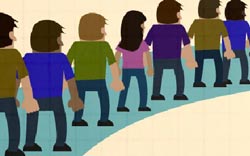 As all eyes turn to San Francisco this week for the kinda-annual ritual unveiling of the next iPhone, mobile marketers may well be asking, how does this really matter to me? Other than simply driving ever skyward the sexiness of mobile and deepening the love affair we already have with devices, there are some tangible effects of an iPhone release that impact developers and marketers. The App Store goes bonkers.

According to app marketing firm Fiksu, the effects of a new iPhone release on the traffic, download volume and attendant marketing costs around app distribution are substantial and long-lasting. The company reiterated some of its learning from the iPhone 4S release in 2011 and now expects a similar effect. While the iPhone 5 will be introduced tomorrow, rumors anticipate a street date of late next week.

One of the things that marketers should expect is the effect of pent-up demand on the app ecosystem. Between September and October last year as the iPhone 4S appeared, Fiksu recorded an increased app download volume of a whopping 29%. This increase in volume of people in the system also helped deflate the average cost of attaining a “loyal” app use, or one who reopens an app more than a couple of times. The dip in acquisition costs actually dropped last year from $1.64 in September to $1.47 in October. But the lower costs extended into November right before the holiday scurry to attain new app customers.

Obviously Fiksu has a vested interest in promoting app marketing. But the company quotes industry sources who are saying that more than 20 million iPhone 5 units could flow into the system in coming months, with perhaps 8 to 10 million of them in just the last weeks of this month. Many of the iPhone 4 owners who did not go for the “S” last year will be looking to upgrade. Fiksu recommends, of course, that marketers make the most of the opportunity and market to the new app users early and before they get expensive.

What is also true about a new handset with new visual qualities like a longer screen is that users also revisit old apps. I expect many informational apps will simple add more data in the newfound space. But some apps with challenging interfaces and microscopic detail (yeah, I am talking to you, Final Fantasy Tactics and Bastion), may get a refresh of interest.

Anyone recall the days when we used to upgrade graphics cards with faster 3D rendering speeds and higher resolutions? The first thing we did was reload or reinstall old favorites to see how they felt now. Something like that, I think, happens when you expand a smartphone screen.

In other words, one of the marketing opps for app developers of all kinds is to leverage the new screen real estate in novel ways and promote the refresh. Incremental as the screen increase likely will be on the iPhone 5, a new toy is, after all, a new toy.